MANILA (AFP) - Three Philippine police officers and an informer were charged on Monday (Jan 29) with murdering a teenager in a case which highlighted alleged extrajudicial killings during President Rodrigo Duterte's anti-drugs war.

The authorities say they have killed 3,987 suspects in "self-defence" in anti-drug operations since Mr Duterte came to power in mid-2016.

An unspecified number of people had also been killed by unknown suspects in 2,235 "drug-related incidents".

Police had alleged the boy was a drug dealer who fired at them while resisting arrest. But investigators concluded he did not fire a gun and CCTV footage showed him being dragged near his home by two of the accused officers.

The charge sheet against the four said the killing showed premeditation.

"The obvious fact that some of the respondents were seen wearing masks and caps, indicates that they intended to hide their identity and utilise the darkness to carry out their plan."

The four defendants were also charged with planting a firearm on the victim, while two of the officers were additionally charged with making an illegal search of the victim's home. 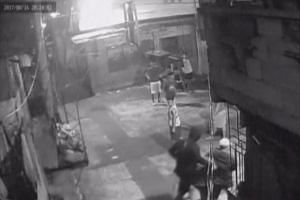 Philippine teen, killed by police in drug war, buried after thousands turned up for funeral procession

However, the Justice Department investigators decided against filing charges of torture against the four.

It also dismissed murder, torture and illegal search complaints against 13 other Manila police officers who were part of the Aug 16, 2017 operation, both for lack of sufficient evidence.

Filipinos have mostly backed Mr Duterte's drug war even as critics warned the killing of thousands may amount to a crime against humanity.

But the death of Delos Santos, as well as of two other Manila teenagers accused of robbing a taxi driver last year, have triggered rare street protests and highlighted concerns about police abuse.

It led to Mr Duterte briefly suspending police participation in the drug crackdown for a second time.

The first occasion was in January last year after narcotics police officers were arrested for the kidnapping and murder of a South Korean businessman in 2016.

However, in both instances the police were reinstated in the campaign without major reforms.