HANOI (AFP) - North Korean leader Kim Jong Un kicked off an official visit to Vietnam on Friday (March 1), three days after arriving in the country for a nuclear summit with United States President Donald Trump that ended in deadlock.

Mr Kim put aside the troubled negotiations for the pageantry of a formal diplomatic occasion in Hanoi, where - accompanied by his sister and close aide Kim Yo Jong - he was received by Vietnam President and Communist Party chief Nguyen Phu Trong.

The smiling leader walked before rows of children waving Vietnamese and North Korean flags outside the mustard-yellow colonial-era Presidential Palace, before inspecting an honour guard.

The long-isolated North is increasingly seeking to portray itself as a country like any other, and Vietnam is Mr Kim's fourth foreign destination in less than 12 months, after not leaving his borders for more than six years following his inheritance of power.

But for protocol purposes, Mr Kim's trips do not rank as state visits, as he is not North Korea's head of state - his grandfather Kim Il Sung retains the title of Eternal President even though he died in 1994.

Instead, Mr Kim is officially chairman of the ruling Workers' Party of Korea and chairman of the State Affairs Commission, although he is most widely referred to as the "Supreme Leader". 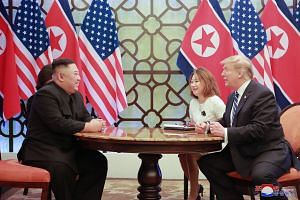 The North's state KCNA news agency described it as an "official goodwill visit" to Vietnam.

Curious onlookers lined the streets on Friday to catch a glimpse of Mr Kim - the first North Korean leader to visit Vietnam since Mr Kim Il Sung in 1964.

But not all were impressed.

"The summit failed. I don't know how much Vietnam has spent on this, but it must be a lot," Hanoi resident Tu Mai, 40, told AFP. "I don't like either Trump or Kim."

The North Korean leader later met the head of the Vietnam's Parliament, Nguyen Thi Kim Ngan, telling her that the warm relationship between their nations was established by Mr Kim Il Sung and Vietnam’s revolutionary leader Ho Chi Minh.

“I was deeply moved by the fervent welcome from the Vietnamese people and felt our 70-year history of friendly ties,” Mr Kim said.

During the Cold War, Vietnam and North Korea were both members of the Communist bloc, with Pyongyang sending Hanoi pilots and psychological warfare specialists to help it in the Vietnam War.

Hanoi has since embraced market economics and been rewarded with rapid growth, while it now counts the US as an ally.

Mr Kim is expected to lay wreaths at the Ho Chi Minh mausoleum and war martyrs monument on Saturday ahead of his planned departure by train for the marathon return journey home.

The streets of Hanoi have been lined with heavy security along with military equipment and armoured vehicles for the summit, and some said it was exhausting work.

"It's tiring, we've been on high alert for two weeks now," a police officer told AFP.

"I really wish it would end soon, as it really disrupts people's lives."