The harmful haze was worsened by smoke from forest fires on the Myanmar side, with a satellite image on Sunday showing 1,035 hot spots in the neighbouring country, and 516 in Thailand (123 of which were in the North, with only two in Chiang Rai).

With border district Mae Sai topping the North for PM2.5 levels for two consecutive days (128mcg on Monday and 80mcg on Sunday), residents were told to avoid outdoor activities.

According to the Thai Pollution Control Department, PM2.5 particulates in the nine northern provinces ranged from 29mcg to 117mcg as of 9am on Monday.

Air pollution in tambon Wiang Phang Kham stood at 117mcg at 9am and further worsened to 128mcg at 11am. 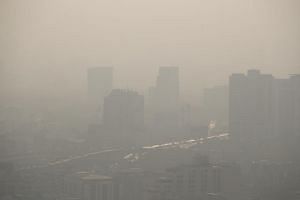 Muang Chiang Mai, meanwhile, was once again enveloped in haze, with readings of 58-70mcg after a period of better air since March 5.

Phayao - in the midst of combating multiple outbreaks of forest fire - reported that officials had put out a fire that damaged 16 hectares in tambon Dongjen of Phukamyao district, which stemmed from villagers lighting fires while poaching for forest products.

Two Bangkok Airways flights from Chiang Mai to Mae Hong Son - PG251 at 9.20am and PG352 at 10.35am - were cancelled on Monday due to visibility problems.

So far, four flights have been cancelled this month due to haze.

A satellite image taken at 1.54am on Monday showed Mae Hong Son province as having 115 hot spots, especially in the three districts of Pai (33 hot spots), Pang Mapha (30) and Muang (29).

These were contributing to a dangerous the PM2.5 level of 81mcg, although Srisangwal Hospital had not yet detected any unusual increase in the number of respiratory patients.