JAKARTA (THE JAKARTA POST/ ASIA NEWS NETWORK) - Indonesia's General Elections Commission (KPU) has decided not to provide the presidential candidates with a list of question before the next election debates, after public criticism of the first contest, which took place last Thursday (Jan 17).

KPU commissioner Pramono Ubaid Tanthowi said the decision was made after an evaluation of the first debate. "We will inform the teams of the two candidates in a meeting on Monday," Mr Pramono said on Sunday (Jan 20).

He said the KPU took public opinion, especially from civil society groups, into account when it made its decision.

The decision was made during a meeting to evaluate the first debate and to make improvements in the following debates, which will be held once a month until the election on April 17.

A political observer from the Indonesian Public Institute (IPI), Mr Jerry Massie, urged the KPU not to give any more "cheat sheets" to ensure a better quality debate.

"The first debate appeared uninteresting and of a poor quality. Anyone can debate (if they receive the questions beforehand)," Mr Jerry said as quoted by Antara.

Last Thursday, candidates President Joko Widodo - who is seeking a second term - and Mr Prabowo Subianto, as well as their respective running mates Ma'ruf Amin and Sandiaga Uno, faced off in their first debate at the Bidakara Hotel in South Jakarta. Despite the cheat sheet, the candidates traded barbs and sometimes got quite heated in the debate moderated by news presenters Ira Koesno and Imam Priyono.

The concerns of a potentially uninteresting debate had been expressed by several experts prior to the debate, but in its defence, the KPU said that the hints were provided to allow candidates to present ideas clearly and comprehensively.

KPU commissioner Pramono said previously in a statement that the debate should be more about presenting ideas than political theatre. "Election debates are not quizzes or a reality show filled with guessing games. That is not the substance. What voters need are their ideas, visions and missions, not entertainment." 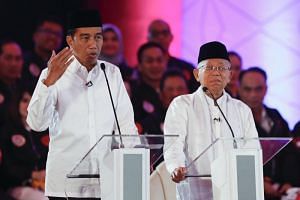 The KPU handed five questions to both presidential candidate pairs several days before the first debate.

In addition to the prepared questions, the candidate pairs were also given the opportunity to ask questions of their rivals. The questions were confidential, but should not go beyond the set topics.

Vice-presidential candidate Sandiaga said he supported the KPU's decision to liven up the debate.

"Each candidate pair will convey what's on their minds and in their hearts openly and comprehensively without having to be limited by the question list," he was quoted as telling the Antara news agency on the sidelines of his campaign activity in Surabaya, East Java, last Saturday.

The second debate is slated for Feb 17 and will have energy, food, natural resources, environment and infrastructure as the topics. Only Mr Joko and Mr Prabowo will face off in the second debate. The third one will be on March 17 and only the running mates will participate, to debate education, health, manpower and social and cultural topics.

The fourth and fifth debates will have all four on the stage to talk about ideology, government, defence and security and international relations on March 30, and economy, social welfare, finance and investment and trade and industry. The time for the fifth debate has not been decided.