MANILA (AFP) - Philippine policewoman Ruby Buena's introduction to one of the oldest communist insurgencies in the world was a roadside bomb blast followed seconds later by an eruption of gunfire.

"I thought it was my time to die," said 25-year-old Ms Buena, who instead woke up in a hospital with a cracked pelvis to learn that three of her colleagues were dead in the 2018 attack in the central Philippines.

In a nation plagued by armed groups ranging from kidnap-for-ransom outfits to Islamist secessionist movements, the communist New People's Army (NPA) is among the deadliest.

Yet, after decades of failed peace efforts, there is no end in sight to the killing as the campaign marks its 50th year.

The NPA launched its rebellion to create a Maoist state on March 29, 1969 - months before the first human landed on the moon.

It grew out of the global communist movement, finding fertile soil in the Philippines' stark rich-poor divide.

The rebellion also benefited from Ferdinand Marcos' 1972-1986 dictatorship, when the legislature was shuttered, the free press muzzled and thousands of opponents tortured or killed.

Its main stronghold is in the Philippines' restive south, but also scattered in the nation's centre and a few areas in the north.

According to rarely revised official figures, the Maoist insurgency has killed up to 40,000 - less than a third of the estimate for the Muslim separatist rebellion in the south.

But while the killing in the so-called Moro insurgency dropped off significantly even before a landmark 2014 peace deal, the NPA has maintained its campaign of violence. 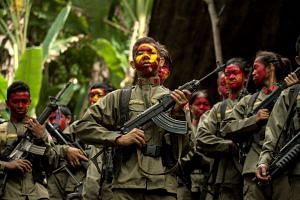 Complete statistics on police and civilian deaths are not available, but military figures show the communists were its deadliest opponent for the period of 2014-2018, killing 444 soldiers.

This outpaced kidnap-for-ransom group Abu Sayyaf and the Islamic State of Iraq and Syria (ISIS) group-aligned factions responsible for periodic spikes in killing like the 2017 Marawi siege.

The five-month siege - where militants seized the southern city of Marawi last year - killed about 1,200 people, most of whom were enemy fighters, according to government figures.

It destroyed much of the centre of the city.

"In terms of threat to national security, NPA is the biggest for now," military spokesman Noel Detoyato told AFP.

The NPA's staying power and deadly reach are rooted in the Philippines' deep poverty and the group's ability raise large sums of money, even after the US labelled it a terrorist group in 2002.

It imposes a so-called "revolutionary tax" in its strongholds, the equivalent of 2 per cent of any business project, that police say generates a minimum of 200 million pesos (S$5.15 million) per year.

Failure to pay results in violence, like torching a company's heavy equipment or facilities.

This year promises to be a particularly lucrative one due to legislative elections set for mid-May. Candidates are hit with "permit-to-campaign" fees if they want to hold events in NPA areas.

Experts see entrenched poverty in the Philippines, where one in five people live on less than US$2 (S$2.70) per day, as key to the NPA's continuing presence.

"NPA is living in a fertile environment," Mr Rommel Banlaoi, chairman of the Philippine Institute for Peace, Violence and Terrorism Research, told AFP.

"The main reason why they were created 50 years ago - feudalism, bureaucratic-capitalism, and imperialism - is still here," he added.

The hardship endures even as the Philippines economy has grown at more than 6 per cent per year for most of the last decade, one of the fastest rates in Asia.

Decades of peace efforts have come to naught, including the burst of optimism produced by the election of President Rodrigo Duterte, who has called himself a socialist.

Mr Duterte branded the talks dead yet again in a speech last Thursday, saying the communists "can maybe talk to the next president of this republic one day".

The political wing of the communist effort, the Communist Party of the Philippines (CPP), sees no end to the violence either.

"The revolutionary forces... have no choice but continue the people's war until total victory is achieved," said party founder Jose Maria Sison, who lives in exile in the Netherlands.

"If they do not fight back, they can only suffer the monopoly of violence by the exploiting classes," he told AFP.