The men, who were aged 20 to 50 and included six Egyptians and a Tunisian, were among nine arrested early last month in the latest round of anti-terror operations by Malaysian police's intelligence department.

They were detained by the Special Branch Department in Kuala Lumpur, Selangor and Sarawak between Feb 2 and Feb 9 after the Counter Terrorism division received a tip-off from intelligence agencies on the presence of several suspected foreign terrorist fighters belonging to the Al-Shariah Al-Tunisia group, which is a part of the Al-Qaeda terror network operating in North Africa.

“This terror group is suspected of being involved in plans to launch large-scaled attacks in other countries” the Inspector-General of Police Mohamad Fuzi Harun said in a statement on Sunday (March 10).

"Three suspects - a Malaysian man and woman, together with an Egyptian man - were nabbed in Serian, Sarawak, for concealing information on the presence of Ansar Al-Shariah Al-Tunisia's operatives who transited in Malaysia. They protected them and acted as a facilitator in providing lodging, jobs and purchasing of flight tickets."

Tan Sri Fuzi added that in Setapak, KL, police arrested a 42-year-old Egyptian who worked as an educator at a religious school in the city. The suspect admitted to being a member of the Ikhwanul Muslimin (Muslim Brotherhood).

Mr Fuzi said the man was detained for being a facilitator in providing accommodation to two members of the Ansar Al-Shariah Al-Tunisia who had sneaked into Malaysia last October. The suspect also has links to two members of the Islamic State of Iraq and Syria (ISIS) and Al-Qaeda who were caught in KL last year.

Tan Sri Fuzi added that members of Ansar Al-Shariah  are suspected of "being involved in plans to carry out large-scale attacks in other countries".

"The third arrest was done against a 24-year-old Egyptian in Bukit Bintang, KL, who is a student at a higher learning institution in the Klang Valley. He too admitted that he is a member of the Ikhwanul Muslimin and acted as a facilitator in purchasing flight tickets for the two Ansar Al-Shariah Al-Tunisia members," he said. 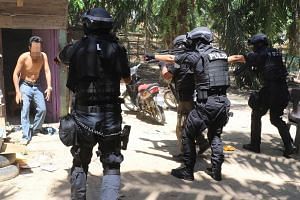 The fourth arrest involved a 28-year-old Egyptian, who is a student at a learning institution in the east coast of Malaysia.

"He is a member of Ikhwanul Muslimin and also acted as a facilitator for the two Ansar Al-Shariah Al-Tunisia members.

"He was also the facilitator for Essam Marzouk Al Hafez (an Egyptian terrorist), who has been deported to Egypt... (Essam was) an Al-Qaeda element who had been jailed for 13 years in the Middle East country," Tan Sri Fuzi added.

"Both men are unemployed and are members of the Ansar Al-Shariah Al-Tunisia based in North Africa. They had been arrested in 2016 for attempting to sneak into an African country. Both suspects entered Malaysia using fake Syrian passports (with the intention of using it) as a transit point, before sneaking into another country to launch attacks," he said.

The last arrest was made against a 50-year-old Egyptian who worked as an Arabic teacher in Ampang, Selangor.

The Ansar Al-Shariah Al-Tunisia member also acted as a facilitator in providing accommodation to two of his peers who sneaked into Malaysia last year.

Investigations found that the foreign terrorist fighters had planned to use Malaysia as a "safe haven" for a transit and logistics centre by using legitimate or fake documentation, marrying locals to obtain a spouse visa, exploiting education facilities, or by doing business in the country.

"The infiltration of foreign terrorist fighters in the country is deemed serious, especially with the recent ISIS defeat. The presence of these fighters can also turn Malaysia into a base to launch attacks in another country or in the country itself," Mr Fuzi said.

The suspected militants have since been deported to their country of origin and blacklisted for life to prevent them from entering the country again.

International and Malaysian rights groups have slammed the Malaysian government over the deportations of the four Egyptians.

Malaysian rights group Lawyers for Liberty executive director Latheefa Koya tweeted last Thursday: “The four Egyptians are members of jailed (former Egyptian President Mohamed) Morsi’s party and are being persecuted for their political beliefs. It’s shocking that the government has deported persecuted persons to a regime that practises torture and killings. (Their) families and lawyers were denied information and kept in the dark throughout."