KUALA LUMPUR - Newly-elected Umno president Ahmad Zahid Hamidi has vowed to give his two opponents key roles and adopt their ideas to reform the grand old party that is still reeling from losing a six-decade grip on power.

Although Datuk Seri Zahid won 99 out of 190 divisions - one division had its election postponed - in an electoral college system, he garnered 42 per cent of over 90,000 votes cast.

This indicated that a majority of delegates wanted a change at the very top, with outgoing youth chief Khairy Jamaluddin finishing in second place, 38 divisions behind but less than 7,000 votes short.

Mr Zahid, speaking to the media for the first time since winning in Saturday's leadership contest, said Umno would be restructured to strengthen it.

"My responsibility is to bring them in and give them a role in taking steps to renew the party," he said of Mr Khairy and Tan Sri Razaleigh who had sought a return to mainstream leadership after three decades in the fringes. 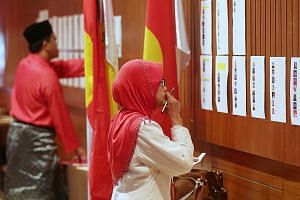 Mr Zahid added that he would consult with other elected leaders in the supreme council - the party's top decision-making body - to try and execute the manifestos of all three presidential candidate in a bid to reform Umno.

He now presides over a party that largely picked established names in the supreme council.

But these experienced hands now have to take on the task of being a credible opposition to the ruling coalition, Pakatan Harapan.