KUALA LUMPUR (THE STAR/ASIA NEWS NETWORK) - Musang King, the Malaysian durian variety which reigns supreme among fans of the fruit, could see a new challenger to the throne.

The Royal ASFA50 - which stands for Anniversary Sirajuddin Fauziah 50 - was introduced to mark the 50th anniversary of the marriage of the ruler of northern Perlis state, the Raja of Perlis Tuanku Syed Sirajuddin Syed Putra Jamalullail and Raja Perempuan of Perlis Tuanku Fauziah Tengku Abdul Rashid.

ASFA50 is said to taste as good as its internationally-renowned cousin but needs only less than half the time to mature.

According to Mr Ferri Anugerah Makmur, who owns the company distributing the ASFA50, this new durian rival is uniquely fragrant, less pungent and takes only three years to bear fruit. The Musang King yields fruit only after a nine-year wait.

"The fruit just melts in your mouth from the first bite and it is less gassy than other types. It is sure to be a hit not only with Chinese nationals but also the Europeans," Mr Ferri said at his home in Ampang, Selangor on Tuesday (Nov 28).

ASFA50 is cultivated by a company owned by Tuanku Syed Sirajuddin.

"We are still conducting R&D (research and development) on a 50ha plot up north and expect to harvest the fruits in 2020," said Mr Ferri. 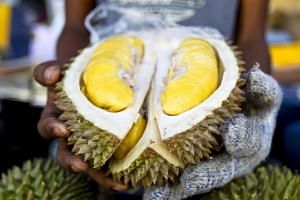 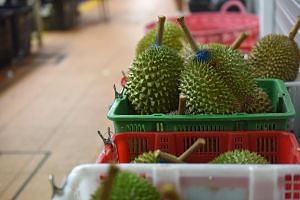 The fruit that smells like gym socks is skyrocketing in China, and Malaysia wants a piece of it

The tree, he added, is only 5m tall and 2m wide when fully grown and is capable of being harvested twice a year.

"Its yield is half the weight of the tree. We have to put up supports to stop the fruit from touching the ground," he added.

"It's a combination of the Musang King, Udang Merah, Durian Tembaga and Black Thorn, which makes it a resilient tree and much tougher than any cloned species from sapling to the adult tree," Mr Ferri said.

He said more than 5,000 saplings had been sold so far - at RM150 each - to distingushed Malaysians like former prime ministers Mahathir Mohamad and Abdullah Ahmad Badawi, and former finance minister Daim Zainuddin, who is known to have planted 75 of the saplings on the grounds of his home in Selangor.

Mr Ferri said the fruit would be priced at RM60 per kg, though the company might consider lowering the price to stay competitive.