Huong is on trial for the 2017 Kuala Lumpur airport assassination of Mr Kim Jong Nam. Her Indonesian co-accused was released last week after prosecutors dropped a murder charge, but authorities refused to do the same for Huong.

Datuk Abdul Fareed, who was elected on Saturday (March 16), said while the A-G was not obliged to give an explanation, it would be better that he did as the case was a high-profile one.

"The discretion to charge or not to charge a person lies with the A-G. That has been done on many occasions.

"(However) the acquittal of the Indonesian Siti Aisyah was done after the prosecution and defence were called," he said, adding that this was not usual.

Mr Abdul Fareed also said it was not usual for two individuals to be charged with the same crime but for one person to have his or her charges dropped.

"This case has attracted international attention, so there are a lot of questions about why one person is acquitted and the charges against her withdrawn while the other person remains charged," said Mr Abdul Fareed at a press conference during the Malaysian Bar's 73rd AGM at Wisma MCA on Saturday.

The man he replaces as president, Mr George Varughese, had also earlier said it was the A-G's prerogative to drop charges while adding that it would be good for an explanation to be furnished. 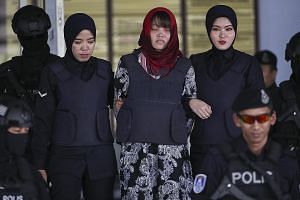 Lawyers: Decision not to free Viet accused is discrimination

Meanwhile, touching on the matter of replacing the Certificate of Legal Practice (CLP) with the Common Bar course, Mr Abdul Fareed said a consultative meeting had been held in January this year.

Other consultative meetings on the matter were expected to take place over time, he added.

The Malaysian Bar resolved to urge the government to abolish draconian laws such as the Prevention of Terrorism Act 2015, Security Offences (Special Measures) Act 2012 and the Sedition Act 1948.

It also called for a Royal Commission Inquiry into the allegations of judicial misconduct made by appellate judge Datuk Dr Hamid Sultan Abu Backer to immediately commence.

In addition, it urged the government to make public the report by the Institutional Reforms Committee that was submitted in July last year.

Mr Salim is acting as lawyer for Huong.