PETALING JAYA (THE STAR/ASIA NEWS NETWORK) - The new King will take his oath of office on Jan 31, allowing him to carry out the duties of the Yang di-Pertuan Agong soon after, says the Keeper of the Rulers' Seal.

Tan Sri Syed Danial Syed Ahmad said on Tuesday (Jan 8) taking the oath of office would mean that the 16th Yang di-Pertuan Agong would be able to take on his responsibilities immediately, even before being installed as King ceremonially.

Though a constitutional monarch, the King, or Yang di-Pertuan Agong, is seen as a symbol of Malay power and protector of Islam, the state religion.

Malaysia was jolted by the resignation of the Sultan of Kelantan, Sultan Muhammad V, as the 15th Yang di-Pertuan Agong on Sunday (Jan 6) in an unprecedented move.

Neither the palace nor the Prime Minister's Office has given a reason for the sudden abdication of the 49-year-old monarch after just two years as King - three years short of the usual five-year tenure.

Under Malaysia's unique five-year rotation system involving the nine royal Malay houses, the next in line is Sultan Ahmad Shah of Pahang, 88, followed by Sultan Ibrahim Sultan Iskandar, 60, of Johor, and then Sultan Nazrin Shah from Perak, 62.

Sultan Ahmad Shah is not in good health, and his son has been Regent for two years. 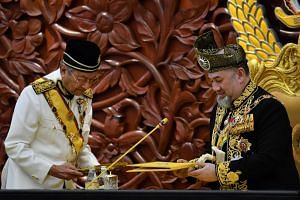 Prime Minister Mahathir Mohamad said on Monday that the government hopes the new king would be elected as soon as possible.

Syed Danial, the Keeper of the Rulers' Seal, explained on Tuesday the decision of the Conference of Rulers on Monday to hold a special meeting on Jan 24 to choose the new King, and on Jan 31 for the swearing-in ceremony.

The Conference of Rulers groups the nine sultans and four governors of states with no royal families (Penang, Melaka, Sabah and Sarawak). However, voting for the next king is done only by the nine Malay rulers, with priority given to the monarch who is next in line.

"The former is a restricted meeting which only involves the substantive hereditary Rulers from the nine states and the Keeper of the Rulers' Seal, who is the person appointed by the Conference of Rulers pursuant to Schedule V of Article 38 of the Constitution as the Secretary."

"The latter meeting (taking of Oath of Office) is formally a special meeting of the Conference involving all the members, meaning the Rulers and Yang di-Pertua Negeri (or their nominated representatives) in the presence of the Chief Justice of Malaysia (or the next most senior judge should he be absent)."

"The oaths to be taken by the Yang di-Pertuan Agong and the Deputy must be witnessed by two Rulers who are selected by the Conference of Rulers," said Syed Danial.

He further explained that the new Yang di-Pertuan Agong would then sign a proclamation that he had taken office from that date.

"That proclamation will be read by the Prime Minister. For that special meeting (of taking Oath of Office), guests are invited to witness the august and important occasion."

"They include the official advisers to the Rulers such as all the Mentris Besar and Chief Ministers, the Federal Ministers and other VIPs," said Syed Danial to The Star.

Dr Mohammad Shamsuddin, an expert on Malay customs from Universiti Kebangsaan Malaysia, said the newly sworn-in King would then decide when he wanted to hold the ceremonial installation.

"He will be advised by the Conference of Rulers on a proper date to hold the ceremony. Usually, it is within a year of the swearing-in."

"However, the King can immediately assume all the duties of the King right after taking the oath of office, even though he has yet to be installed as the King ceremonially."

"While the taking of Oath of Office is done among the Conference of Rulers themselves, the installation ceremony is largely a public affair and it is to announce to the public and the world that the country has installed a new King," said Dr Mohammad.