NEW DELHI (Washington Post) - Citing toxic smog that one official said has turned India's capital city into a "gas chamber," United Airlines has cancelled flights to New Delhi until the air gets better.

At least in United's eyes, the Indian capital's smog concerns are on a par with environmental disasters like hurricanes and volcanoes - a risk to be avoided.

The company said it was letting passengers switch flights without charge or helping them find seats on other carriers.

It was unclear if other airlines would follow suit. Virgin Atlantic, KLM and Etihad Airlines all compete for business to New Delhi, according to CNN Money.

An advisory on United's website said travel to New Delhi was suspended through at least Tuesday.

"United has temporarily suspended our Newark-Delhi flights due to poor air quality concerns in Delhi and currently has waiver policies in place for customers who are travelling to, from or through Delhi," the company said in an email.

"We are monitoring advisories as the region remains under a public health emergency, and are coordinating with respective government agencies."

New Delhi's air quality is consistently ranked among the world's worst. But a perfect storm of problems is exacerbating the problem to potentially deadly levels. 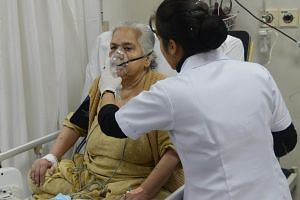 As Delhi struggles to breathe, hospitals are filling up

Farmers who've recently harvested crops in neighbouring states are illegally burning their fields, sending smoke into the air. Construction projects and pollution from vehicles in a city that lacks adequate public transportation are making things worse.

More than 6,000 schools have been ordered closed, and only trucks carrying essential supplies are allowed into the city. Construction projects have been halted. And the nation was mulling a plan to spray water over its capital to combat the toxic smog.

Still, photos show the city enveloped in a gray haze. Residents braving the streets looked like surgeons or carpenters, depending on which type of mask they were able to acquire.

But doctors say it won't be enough to prevent some deaths in the city of 20 million people. Children are the most vulnerable.

In a less-affluent quarter of the city, Baburam Durbedy's grandson hasn't been eating. "His temperature is up and he keeps getting out of breath," Durbedy said. He wiped his own irritated eyes as he spoke.

Durbedy earns just enough to survive, working as a security guard in the city.

Buying high-end air purifiers is not an option, nor is expensive medical care. The family of five has two thin gas masks to share. "We just rub Vicks on his chest," he said, referring to the medicated vapor rub.

A recent study linked 2.5 million deaths in India in 2015 to pollution.

Last week, worried parents carried coughing children into hospitals around the city."We've seen around a 30-35 per cent increase of patients in the past couple of days," said Anupam Sibal, group medical director and senior pediatrician at Apollo Hospitals. "It wasn't like this five years ago. Children with respiratory problems are finding their issues are exacerbated. It affects everyone."