His arrival was greeted with chants of “Bebas Najib” (Free Najib) from dozens of supporters.

Datuk Mohd Razlan Mohamad Rafii, spokesman for the Solidariti Bersama Datuk Najib (Solidarity with Datuk Najib) group said earlier that  a total of RM490,000 had been collected from the public to settle the bail amount.

He said he hoped the donations would bring financial and moral support to Najib.

"Not only did we have donations come in from all over Malaysia but there were also donations from Singapore, Indonesia and Canada," he said. 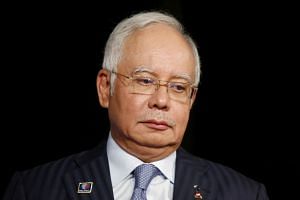 Najib's supporters to launch fund to help him pay for his $337,000 bail

“I feel so touched by the donations from Umno members from all levels,” said Najib, as quoted by news site Malaysiakini.

“This (the donations) is a sign of Umno members and ordinary citizens showing their love for a leader. It is hoped that with their prayers and blessings, my family and I will be able to successfully overcome this major challenge,” the Pekan MP said.

Actress Ellie Suriaty was among Najib's supporters spotted at the Kuala Lumpur Court Complex ahead of the arrival of the former prime minister.

Ellie showed up with a few supporters at about 9.25am on Monday.

A donation campaign to fund the former premier's legal defence was also launched.

He pleaded not guilty to the charges.

The argument for bail took about an hour before it was fixed at RM1 million by High Court judge Datuk Mohd Sofian Abd Razak.

Payment of the bail was allowed to be made in two instalments and Najib left the court complex last Wednesday after paying RM500,000 with the remainder to be paid on Monday.