ISKANDAR PUTERI (THE STAR/ASIA NEWS NETWORK) - An average of 295,731 people use the two land crossings between Malaysia and Singapore daily.

"This did not include the ones travelling on motorcycles, cars, vans, lorries and buses," he said.

"These two crossings are among the busiest in the world," he said, adding that several strategies had been put in place to overcome congestion at both links.

Among the steps was beefing up the Immigration Department, with another 468 personnel by June this year to man the counters in both places. 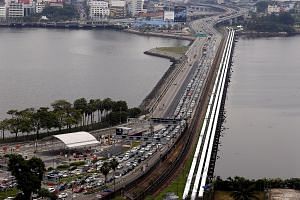 Malaysia, Singapore PMs to discuss congestion at the Causeway 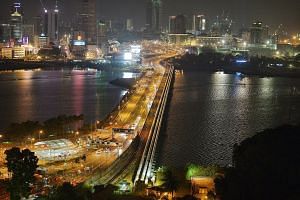 "We are also ensuring that all 351 booths are manned, especially during peak hours," Datuk Tee said, adding that this was achieved after a freeze on leave by immigration personnel.

Mr Tee said the state government hoped to increase the frequency of the train service to Singapore and have additional bus services from Iskandar Puteri to Boon Lay and Jurong East on the island republic.

There were also plans to have more direct flights from Senai International Airport so that locals would not need to travel to Singapore to take flights.

It would also be good if the police could set up a mobile station on the Causeway, and later at the Second Link, to monitor and control the traffic, he said in his winding-up speech.

He hoped the Federal Government would allow tourists in tour buses to enter the country without having to bring down their luggage.

On the development of Senai Airport, he said there was an increase in travellers who used the facility, from 2.325 million in 2014 to 2.581 million last year.

"Next month, AirAsia will be flying directly to Guangzhou, China," he said, adding that they would be eyeing more direct flights to India, Myanmar and the Philippines.