KUALA LUMPUR - Former Malaysia prime minister Najib Razak declined to confirm or deny the existence of a letter written by a Malaysian intelligence unit then under his watch, asking the US Central Intelligence Agency (CIA) to support his Barisan Nasional (BN) coalition.

The letter, dated five days before the fateful May 9 general election that toppled Najib and BN from power - was reportedly written by Hasanah Ab Hamid, director-general of the Research Division in the Prime Minister's Department - an intelligence unit.

The letter was addressed to then CIA director-designate Gina Haspel, who has since taken up the job.

The existence of the letter was first reported last week by Malaysiakini, with officials from the new Pakatan Harapan government saying they wanted investigations into the missive.

There have also been calls by those outside government to probe the veracity of the letter, with claims that asking a foreign government to intervene in Malaysia's political affairs is tantamount to treason.

A picture of the contents of the letter has gone viral on social media.

The letter appealed for US support for the Najib administration "even if we win the election by a simple majority or just one seat".

"I hope Your Excellency's esteemed service would be able to report to the secretary of state on the complexity of managing this election by Prime Minister Najib and the need to have US support for the present government even if we are to win the election by a simple majority or just one seat." 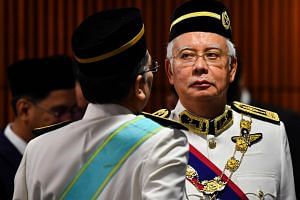 "Any indication that the US government would continue to support Prime Minister Najib and his government would definitely strengthen our stability and enhance the existing cordial relationship driven by the strong rapport between our two leaders," read the letter signed by Datuk Hasanah.

MP Najib, asked by reporters about the letter at Parliament's lobby on Thursday (July 26), said: "I cannot confirm nor deny the letter. I have no knowledge."

But he also claimed that such a letter would be "agency to agency" and that such dispatches are usually official government secrets, Malay Mail news site reported.

Finance Minister Lim Guan Eng on Thursday called for an investigation into the letter.

He said there were many questions surrounding the issue of such a letter as it concerns Malaysia's sovereignty.

"Was this letter sent to other countries? Are there any more letters?" Mr Lim told reporters, as quoted by Malay Mail.