KUALA LUMPUR - Former Malaysia prime minister Najib Razak has said that those helming Umno should be given the space to lead and it would be unfair for the party to carry his "burden".

He was responding to comments by three Umno leaders who said the party must forge ahead without Najib, as the charges against him in court could cloud its effort to rebound from defeat in national polls three months ago, in May.

He was also questioned by them for leading the charge in a by-election in Selangor that concluded last week with a poor showing by the Umno candidate who was his former senior aide while in government.

Najib wrote in a Facebook posting on Friday (Aug 10): "I have no intention of being Umno president any more. The new Umno leadership should be given the trust and space to prove their leadership in gaining the trust of the people."

He added: "All the allegations are against me and not Umno. It is unfair for them to bear this burden."

Najib, now just an MP for a Pahang ward, is faced with seven charges in court linked to an alleged inflow of millions of dollars into his personal bank accounts from SRC International, a former subsidiary of state fund 1Malaysia Development Berhad . 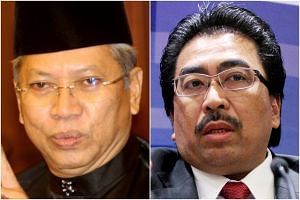 Datuk Khaled, one of three party vice-presidents, said in a statement on Thursday: "Yes, we should treat him with honour and respect, but we should move on from what has passed. It is Najib who is on trial, not Umno."

Datuk Seri Johari said it was a mistake to have allowed Najib to campaign in the Sungai Kandis by-election in Selangor.

"We need to forget the era before the May 9 election. Umno has a new president and new leadership," said Mr Johari in a statement on Wednesday.

Najib said in the Friday Facebook post that he had campaigned in that by-election at the invitation of the Umno candidate Lokman Adam, who is a member of Umno's supreme council and was Najib's former communications director at the Finance Ministry.

"I only helped Lokman Adam to fulfil his wish that I campaign for him in the Sungai Kandis by-election," Najib said.