KUALA LUMPUR (THE STAR/ASIA NEWS NETWORK) - Former Malaysian prime minister Najib Razak and his wife Rosmah Mansor will be called up by the police in connection with the ongoing investigation into 1Malaysia Development Berhad (1MDB).

He told a press conference on Wednesday (June 27): "We will call them up soon for questioning. However, we need to call other persons of interest as well first.

"So far, we have recorded more than 30 statements pertaining to the investigation."

On the possibility of arrests being made in the case, Datuk Seri Amar said there were none so far, adding that he was not aware of rumours behind the "arrest" of the former premier on Tuesday night.

Commenting on the largest seizure in Malaysian history, Mr Amar said he and his officers were shocked at the total amount.

Earlier in the press conference, it was revealed that the cash and items seized from residences linked to Datuk Seri Najib amounted to between RM900 million and RM1.1 billion (between S$304.6 million and S$372.3 billion). 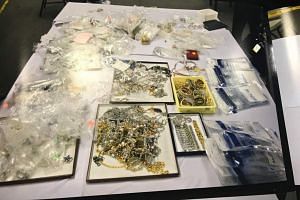 Mr Amar said it took police from May 21 to June 25 to ascertain the value of the cash and items seized.