KUCHING (THE STAR/ASIA NEWS NETWORK) - Sarawak has always been a strong partner of the Barisan Nasional government and deserves all the support in its pursuit of development, said Malaysian Prime Minister Najib Razak.

Pledging to further assist physical development in Sarawak to ensure that the state is on a par with the rest of the country, Datuk Seri Najib said: "As Prime Minister, I want the whole country to be developed and not left behind.

"It is my responsibility to close any development gap between the states.

"You don't have to worry. I'm a good friend of Sarawak. Giving big allocations to Sarawak is worthwhile considering its large size."

Mr Najib said he also had no issues with supporting Sarawak's digital economy agenda, including its plan to enhance physical connectivity across the state.

"No problem. I'll support Sarawak's plan to set up its LRT network in Kuching, for road connectivity from Sibu to Kapit as well as the building of the Batang Lupar bridge to connect the coastal road," he said during the opening of Parti Pesaka Bumiputera Bersatu's (PBB) 14th convention on Saturday (Feb 10).

"At the same time, we will set up a high-level committee to start negotiations on the return of Sarawak's rights relating to the Malaysia Agreement 1963 that were eroded over the years." 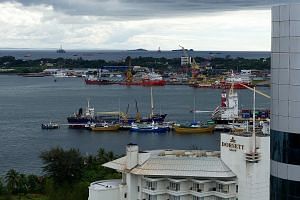 Najib tries to bridge divide with East Malaysia ahead of polls

It was evident, Mr Najib said, that the Barisan government enjoyed strong support from Sarawak, winning 72 of the 82 seats during the 2016 state polls.

In the 2013 general election, Barisan won 26 out of 31 parliamentary seats.

"Barisan is fighting for Sarawak's rights and we are sincere in helping the people," he said, lauding the solidarity shown by PBB members who did not contest the top posts at its triennial delegates conference.

The party, he said, could become a role model for other Barisan component parties in promoting a strong united front leading to the general election.

He said since Mr Najib became Prime Minister in 2009, he had visited Sarawak 59 times and gone to 126 places, announcing many projects.

"Najib's relations with Sarawak go a long way. When he was defence minister, he helped set up a service centre in Ulu Baram for the Penans," said Datuk Abang Johari. "As education minister, he approved the setting-up of Curtin and Swinburne Universities."

He also pledged that Sarawak Barisan would give Mr Najib a landslide victory in the polls, with an even bigger mandate.

"Before we can ask for more fund allocations or projects, we must give a good report card. We must score an A+ in the next election," he added.