Najib's lawyer Muhammad Shafee Abdullah told the Kuala Lumpur High Court on Wednesday (Jan 9) that the defence had filed an application for leave to support its application to disqualify Mr Sri Ram's appointment.

On Aug 31, Attorney General Tommy Thomas announced the appointment of Mr Sri Ram, a retired former federal court judge, as the lead prosecutor in the prosecution against Najib's 1MDB and its related cases.

The case before Justice Sequerah on Wednesday pertains to 21 counts of money laundering and four counts of abuse of power against Najib last September in relation to more than US$681 million (S$924 million) that went into his personal account.

The Wall Street Journal reported in 2015 that the money was transferred to the then Prime Minister in 2013.

The sum, which amounted to RM2.6 billion at the time, is believed to be from 1MDB, which suffered debts of more than RM50 billion (S$16.5 billion) at its peak. 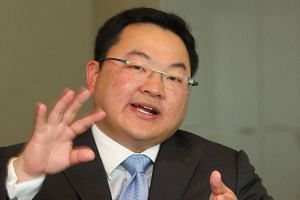 Najib has denied any wrongdoing, saying the funds were a donation from the Saudi royal family.

After Pakatan Harapan's shocking win in the May 9 General Election, the authorities began investigating, conducting home searches and bringing charges against Najib.

Besides Najib, the Malaysian government has also charged his wife, Rosmah Mansor, with corruption and money laundering.

National news agency Bernama reported on Wednesday that Rosmah's application to transfer her case from the Sessions Court to the High Court was set on Jan 24.

She pleaded not guilty last November to one count each of soliciting and accepting bribes over a solar hybrid project for rural schools in Sarawak.