Datuk Seri Najib was arrested at his home on Tuesday, less than two months after an election defeat to a coalition led by his mentor-turned-foe Mahathir Mohamad.

Here is a look at the events leading to his arrest:

Three months after taking over as prime minister, Mr Najib Razak launches the 1MDB sovereign fund to invest in energy, real estate and other industries.

1MDB, with debt burdens rising, misses a loan payment of about US$550 million (S$751 million).

Malaysia forms a special task force - including officials from the central bank, police, anti-graft agency and the Attorney-General's Chambers - to look into 1MDB. 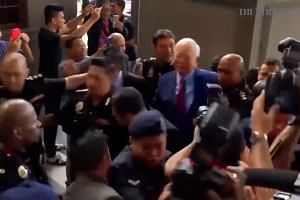 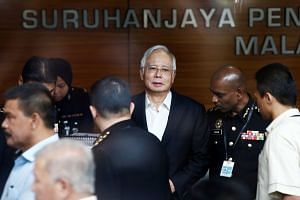 The attorney-general clears Mr Najib of any wrongdoing, saying that US$681 million in his account was a donation from a member of the Saudi royal family, and that Mr Najib had returned US$620 million in a few months.

A Malaysian parliamentary inquiry team slams the 1MDB board for being irresponsible, and urges a probe into its former chief. The 1MDB board resigns.

The US Department of Justice (DOJ) files civil lawsuits seeking to seize assets bought with money allegedly stolen from 1MDB, saying that over US$3.5 billion was misappropriated from the fund. The lawsuits say US$681 million from a 2013 bond sale by 1MDB was transferred to the account of "Malaysian Official 1", whom US and Malaysian officials later identify as Mr Najib.

The DOJ says more than US$4.5 billion was siphoned from 1MDB by high-level fund officials and their associates.

DOJ says it is conducting a criminal probe into 1MDB.

The US attorney-general describes the 1MDB scandal as "kleptocracy at its worst".

Police say nearly US$275 million of assets was seized from properties linked to Mr Najib, including 12,000 pieces of jewellery, more than 500 handbags, over 400 watches and nearly US$30 million in cash. Bank accounts belonging to Mr Najib's political party Umno are frozen.