KUALA LUMPUR - A woman who sashayed into the office of Malaysia's Youth and Sports Minister Syed Saddiq Syed Abdul Rahman has diverted some attention away from the incessant squabbling in Malaysian politics.

A video clip of the woman, whose name is unknown, boldly walking into the 26-year-old minister's office, has been widely shared on social media, setting tongues wagging.

After leading several men into the minister's office, the woman in the video, wearing a peach-coloured baju, placed her pink Prada bag on the table right in front of him.

She then sat down beside him for a scheduled meeting in his office.

The handsome Syed Saddiq, who is still single, is considered one of Malaysia's most eligible bachelors, while the woman has remained a complete mystery.

Is she the minister's new personal assistant? His girlfriend? A media personality?

Naughty comments were also made on social media on whether she is in fact a transgender person.

The video and pictures of the meeting, and of them standing next to one another after the meeting have been widely shared.

Mr Syed Saddiq said on Tuesday (Oct 22) that it was "gossip and slander" to link her to him.

A company called Esports Business Network (EBN) said in a statement on Tuesday to Malay Mail news site that the meeting was between its officials and the minister.

"The EBN was first contacted by Cleo International Sdn Bhd to be project partners in a holistic youth driven initiative that included e-sports among other core youth development pillars," EBN said in a statement quoted by Malay Mail.

"The purpose of the meeting was to introduce the youth initiative to the Youth and Sports Ministry." 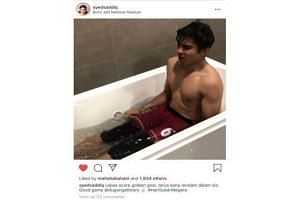 Mr Syed Saddiq said the woman, whom he did not identify, was part of a delegation from Orange E-sports - a company under EBN.

The Malay Mail report said EBN named the woman as "Cleopatra", who presumably is the representative of Cleo International.

The news site tried to uncover her identity, but found that she used only the moniker @cleopatra_x3 on her Instagram account.

She has many other glamorous snapshots of her life on her account.

In an apparent response to the intense attention, she put up a posting on Tuesday of her holding a baby, with the words: "Single Mummy with 2 beautiful babies. End the fiasco."