COX'S BAZAR, BANGLADESH/YANGON (REUTERS) - Myanmar urged Muslims in the troubled north-west to cooperate in the search for insurgents, whose coordinated attacks on security posts and an army crackdown have led to one of the deadliest bouts of violence to engulf the Rohingya community in decades.

The clashes and military counteroffensive have killed nearly 400 people during the past week.

The treatment of Buddhist-majority Myanmar's roughly 1.1 million Muslim Rohingya is the biggest challenge facing leader Aung San Suu Kyi, accused by Western critics of not speaking out for the minority that has long complained of persecution. 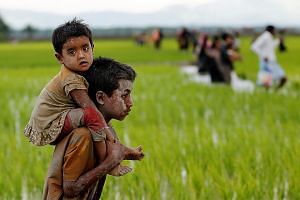 Over 2,600 Rohingya homes set on fire

It marks a dramatic escalation of a conflict that has simmered since October, when a smaller Rohingya attack on security posts prompted a military response dogged by allegations of rights abuses.

"Islamic villagers in northern Maungtaw have been urged over loudspeakers to cooperate when security forces search for Arakan Rohingya Salvation Army (ARSA) extremist terrorists, and not to pose a threat or brandish weapons when security forces enter their villages," the state-run Global New Light of Myanmar said on Sunday.

ARSA has been declared a terrorist organisation by the government. The group claimed responsibility for coordinated attacks on security posts last week.

In Maungni village in northern Rakhine, villagers earlier this week caught two ARSA members and handed them over to the authorities, the newspaper added.

The army wrote in a Facebook post on Sunday that Rohingya insurgents had set fires to monasteries, images of Buddha as well as schools and houses in northern Rakhine.

More than 200 buildings, including houses and shops, were destroyed across several villages, the army said.

While Myanmar officials blamed the ARSA for the burning of the homes, Rohingya fleeing to Bangladesh and human rights watchers say a campaign of arson and killings by the army is aimed at trying to force the minority group out.

More than 11,700 "ethnic residents" had been evacuated from northern Rakhine, the government has said, referring to non-Muslims.

In Bangladesh, authorities said at least 53 bodies of Rohingya had either been found floating in the Naf river or washed up on the beach in the past week, as tens of thousands continue to try to flee the violence.

A senior leader of al Qaeda's Yemeni branch has called for attacks on Myanmar authorities in support of the Rohingya.

Former colonial ruler Britain said on Saturday it hoped Suu Kyi would use her "remarkable qualities" to end the violence.