YANGON (AFP) - Myanmar on Thursday (Jan 25) said it made the decision to dump US diplomat Bill Richardson from an advisory panel on the Rohingya crisis, accusing the veteran politician of a "personal attack" on Aung San Suu Kyi in his stinging resignation letter.

The war of words has heaped embarrassment on Suu Kyi whose star as a rights defender continues to plummet over her failure to speak out for the Rohingya in the face of overwhelming evidence of the Muslim minority group's suffering.

Suu Kyi's office said that during discussions in Myanmar's capital on Jan 22, "it became evident" that Richardson was not interested in providing advice as one of five international members of a new panel on a crisis that has seen nearly 690,000 Rohingya flee a military crackdown to Bangladesh.

"In view of the difference of opinion that developed, the government decided that his continued participation on the board would not be in the best interest of all concerned," the office said in an English statement posted on Facebook.

The Burmese-language version said they decided to "terminate" his participation.

Myanmar's explanation stands in stark contrast to Richardson's, who after his three-day visit to the country said he could not in "good conscience" sit on a panel he feared would only "whitewash" the causes of the Rohingya crisis.

He tore into Nobel Laureate Suu Kyi for an "absence of moral leadership" over the problem, and described her "furious response" to his calls to free two Reuters journalists arrested while covering the crisis. 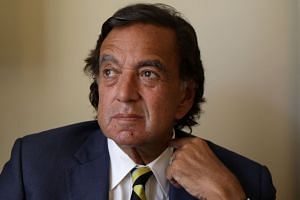 US diplomat resigns from Suu Kyi panel on Rohingya crisis, accuses her of 'absence of moral leadership'

A Myanmar government spokesman hit back earlier on Thursday, accusing the former New Mexico Governor of overstepping the mark.

"He should review himself over his personal attack against our State Counsellor," government spokesman Zaw Htay told AFP, using Suu Kyi's official title.

Urging understanding instead of blame, Zaw Htay said the issue of the arrests was beyond Richardson's mandate and he should not have brought it up at his meeting with Suu Kyi.

The Reuters journalists, Myanmar nationals Wa Lone and Kyaw Soe Oo, face a possible 14 years in prison under the Official Secrets Act for allegedly possessing classified documents that they say were given to them by two policemen.

They had been reporting on the crisis in Rakhine state, where Myanmar troops are accused of waging a vicious ethnic cleansing campaign against the Rohingya that has prompted accusations of murder, rape and arson at the hands of troops and vigilante mobs.

Though Myanmar says it is ready to start repatriating refugees, many fear returning, and some 300 more families crossed the border in recent days after several houses were burned down in Buthidaung township, said Chris Lewa from the Arakan Project, a monitoring group that closely tracks Rakhine.

Suu Kyi's tepid response to the crisis and failure to openly rebuke the military has punctured her reputation as a rights icon.

Myanmar analyst Khin Zaw Win said Richardson's words could deliver a "much-needed jolt for Aung San Suu Kyi and for the people around her who are not reporting the truth to her."

Aaron L. Connelly from the Lowy Institute for International Policy told AFP that the description of the conversation between Richardson and Suu Kyi should "finally dispel the myth that she privately holds views which she cannot express publicly".

Richardson joined the Myanmar board as a private citizen, but the US State Department said the Washington administration shares many of his concerns.

After his trip to Myanmar, the diplomat said he was shocked by the panel members' disparagement of the media, the UN, human rights groups and the international community.

Richardson could not immediately be reached for comment on Thursday.

Fellow members of the advisory board, which included five Myanmar nationals, defended their work on Thursday and denied participating in a whitewashing of the crisis.

"Bill Richardson was making his comments too early and it's very unfortunate from that angle," South African national and panel member Roelof Petrus Meyer told reporters in Yangon.