UNITED NATIONS (AP) - Wary of international interference, Myanmar insisted on Saturday (Sept 28) that it wants Rohingya Muslim refugees who fled to neighbouring Bangladesh repatriated to their former homes so they can live in a "more conducive environment" than the one they left. But it said such a relocation must take place under controlled conditions.

Mr Kyaw Tint Swe, Myanmar's minister for the office of the state counsellor, said in his nation's address at the United Nations General Assembly that Myanmar is working with Bangladesh and the UN to find "long-term and practical solutions" to bring home some of the more than 740,000 Rohingya in the country's Rakhine state, which borders Bangladesh.

"We fully share the concern of the international community over the violence that affects communities in Rakhine," he said. "Our priority now is to expedite repatriation and to create a more conducive environment for verified returnees."

He also warned of "destructive movements in the camps aimed at preventing repatriation".

Myanmar's military began a harsh counterinsurgency campaign against Rohingya Muslims in August 2017 in response to an insurgent attack. Hundreds of thousands of Rohingya fled what has been called an ethnic cleansing campaign involving mass rapes, killings and burning of their homes. Many of them are residing in camps in and around Cox's Bazar, a Bangladeshi town near the border with Rakhine.

Last year, the UN-established Independent International Fact-Finding Mission on Myanmar recommended the prosecution of top Myanmar military commanders on charges of genocide, war crimes and crimes against humanity. Myanmar has rejected the allegations.

Four years after a civilian government in Myanmar officially replaced decades of military rule, Mr Kyaw Tint Swe said that "transformation from authoritarianism to a democratic system is a daunting challenge". Nonetheless, he rejected notions that the conditions around Rohingya repatriation be set by anyone but Myanmar and Bangladesh.

The two nations signed an agreement in late 2017 to address the issue but repeated attempts at repatriation have failed because the Rohingya refuse to return without security guarantees.

"Issues between neighbours can and must be resolved bilaterally in an amicable and friendly manner," Mr Kyaw Tint Swe said. "There have been persistent calls to put pressure on Myanmar. There is also a call to set up a 'Safe Zone' inside Myanmar. Such a demand is neither warranted nor workable."

He added, pointedly: "We do not respond well to coercion that is removed from the fairness and consideration due to a sovereign independent member of the family of nations." 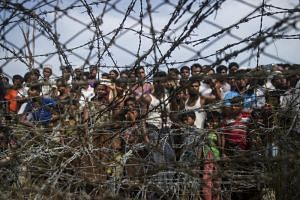 600,000 Rohingya still in Myanmar at 'serious risk of genocide': UN

Mr Kyaw Tint Swe said any displaced Rohingya in Bangladesh would be issued identity cards upon return - either citizenship cards or, for those who don't qualify, green card-style "national verification cards". This is a sensitive issue because Myanmar asserts that many Rohingya came from elsewhere and are not citizens.

Mr Kyaw Tint Swe also rejected notions that the International Criminal Court be involved in any probes into military abuse of Rohingya in Rakhine.

Myanmar is not a party to the court, and Mr Kyaw Tint Swe said an investigation by the country's military recently produced an announcement that "suggests that there will soon be a court martial".

Last Thursday, the UN's top human rights body agreed to set up a team to collect evidence of crimes against the Rohingya and others that could be used to prosecute perpetrators.

A day later, US Secretary of State Mike Pompeo met Mr Kyaw Tint Swe and renewed calls for Myanmar to bring to justice those responsible for abuses.

"Myanmar is not opposed to accountability for any wrongdoing related to the large outflow of displaced persons to Bangladesh," Mr Kyaw Tint Swe said, but added that any international body "does not have jurisdiction over alleged crimes in our country".

Also last Friday at the UN, Bangladesh's leader warned that a wider regional problem would be at hand if the Rohingya situation isn't resolved. The crisis, Prime Minister Sheikh Hasina said, is "going beyond the camps" where most refugees are staying.

Ms Hasina appealed to the international community to "understand the untenability of the situation" surrounding the refugees from Myanmar, who are fleeing persecution by the military there.

She also said health and security are becoming problems, as congestion and environmental problems increase. Bangladesh said last week that the authorities will build barbed-wire fences around more than 30 Rohingya refugee camps near the border to stop their expansion.

Said Ms Hasina: "We are bearing the burden of a crisis which is Myanmar's own making. It is an issue solely between Myanmar and its own people, the Rohingyas. They themselves have to resolve it. Voluntary return of the Rohingyas to their homes in Rakhine state in safety, security and dignity is the only solution to the crisis."