PUTRAJAYA (THE STAR/ASIA NEWS NETWORK) - Malaysia said there is no warrant of arrest for former deputy prime minister Tan Sri Muhyiddin Yassin over a leaked video, and warned irresponsible parties against spreading such rumours.

Deputy Prime Minister Datuk Seri Dr Ahmad Zahid Hamidi, who described the rumour as utter rubbish, said he did not know why such an allegation was spread when there was no reason to arrest his predecessor.

"I have received a lot of calls from concerned people asking whether it is true that the former deputy prime minister was to be arrested. I assured them he is not.

"This rumour is totally nonsense. I had called the Attorney-General and the Inspector-General of Police to verify the allegation, and they answered in the negative. 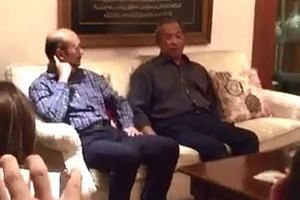 Video on Najib's 'admission': It was a 'private conversation'

"I then called Tan Sri (Muhyiddin) personally at 2am (yesterday) to assure him and his wife that the police were not coming after them," he said in an interview with The Star. 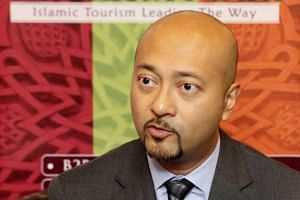 Dr Ahmad Zahid, who is also the Home Minister, said action would be taken against those who spread such malicious lies and rumours.

"I will not hesitate to take action against these rumour-mongers. These rumours are malicious," he said, adding that it could cause anger and unrest among the Umno deputy president's friends and supporters.

On Wednesday, there was speculation that Muhyiddin would be arrested after he was dropped from the Cabinet.

The rumour then spread like wildfire following a leaked video clip, where Muhyiddin told some people, including Kedah Mentri Besar Datuk Seri Mukhriz Mahathir, of a conversation that he allegedly had with Prime Minister Datuk Seri Najib Razak on the 1Malaysia Development Board (1MDB) issue.

Muhyiddin claimed that Najib had admitted that US$700 million in 1MDB funds were deposited into his account.

The clip with poor audio showed Muhyiddin saying: "This is what he (PM Najib) said. He admitted. So I said: Why did you put into your personal account?" The 53-second clip ended there.

On this matter, Dr Ahmad Zahid said what happened was in the privacy of Muhyiddin's house and a conversation among friends that should not have been spread.

"This is an angry and upset man talking. When one is upset, one will say things.

"I know how it feels because I have gone through that too when I was forced to resign (as Umno Youth chief) and was later held under the Internal Security Act," he said.

Asked if there was any truth to Muhyiddin's claim, Dr Ahmad Zahid did not answer but repeated: "An angry man says a lot of things. Whatever it is, we must be respectful towards him."