KUALA LUMPUR (The Star/Asia News Network) - The involvement of many Malaysians in Katibah Nusantara - the Malay speaking arm of the Islamic State in Iraq and Syria (ISIS) - has put Malaysian police on the highest alert.

Intelligence sources have identified more than 200 fighters from Indonesia and Malaysia in the group, which Indonesian authorities have blamed for the Jan 14 terrorist attacks on Jakarta.

"This splinter cell of the terror group has gained prominence in the IS hierarchy," a source told The Star on Saturday.

"Instead of being chosen for petty duties such as cleaning, fighters from Katibah are highly sought after for 'specialised missions', including as snipers and suicide bombers," the source said.

Katibah first came under the radar of intelligence agencies two years ago when it was called Majmu'ah al Arkhabiliy.

The unit, which started out with 100 members based in ISIS's "capital" in Raqqa, Syria, operated along the model set during the Afghanistan war.

"Malaysian and Indonesian fighters are placed in a complex of apartments along with their families.

"As it was during the Afghan war, militants from Malaysia, Indonesia and sometimes Singapore, banded together to form the South-east Asia faction because they spoke the same language," said the source.

Katibah fighters made camp as "close to home" as possible. 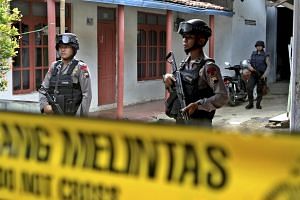 "Their base in Raqqa depicts a mini-Malaysia or Indonesia. Not only do they speak the same language but they also cook similar dishes," said another source familiar with Katibah's operations.

New arrivals in Syria are usually given a month of weapons training.

"If they come with their families, their family members will be placed in flats while the men undergo military training," added the source.

According to a study by the Nanyang Technological University's S. Rajaratnam School of International Studies, Katibah has been expanding its recruitment drive through videos and leaflets published in Malay.

"The campaign has now reached new proportions with the use of young children in Indonesia and Malaysia to propagate ISIS's cause, especially on social media.

"Katibah Nusantara is likely to gain importance in ISIS's strategic goals of establishing a worldwide Caliphate," noted the study.

It also indicated that Malay-speaking fighters were being organised for several reasons.

These include the fact that they are from South-east Asia, home to a sizeable number of the world's Sunni Muslim population. About 30 militant groups in the region have already pledged allegiance to ISIS.

Intelligence experts have warned that militants who return home could play a pivotal role in expanding ISIS's operations and attacks, similar to that which occurred in Jakarta on Jan 14.

"It's the returning fighters that the authorities have to watch out for.

"These seasoned militants are coming back with combat experience and their expertise will be fully exploited by ISIS," said one intelligence source.

He said the weapons proficiency of returning fighters and newly recruited militants and sympathisers posed an even greater danger to the region.

It has been reported that Dr Mahmud, who is high on the wanted list for involvement with ISIS, planned to unite different terror cells in Malaysia, Indonesia and the Philippines, including the dreaded Abu Sayyaf and other militant groups in the region, to officially form the South-east Asian wing of ISIS.

"Katibah must not be underestimated. We are also monitoring to see if this splinter cell has been contacting or cooperating with any militants in Malaysia," he said.

It was reported that Indonesian police killed one militant during a raid on Saturday and detained three suspects for interrogation in connection over last Thursday's brazen attack in downtown Jakarta that left seven people dead, including the five attackers.