"These containers were shipped in from various countries and each 40-foot container carries about 10 to 15 tonnes," he said.

Datuk Saidi said of the 397 containers, 126 were not declared while 155 containers that were found to have been declared were handed over to the authorities for further action.

The latest discovery saw, among other countries, 49 containers from England, 27 from the United States, 14 from Canada, and 10 from Hong Kong.

It was reported on May 31 that 265 cargo containers filled with bits of rotting food, organic matter and plastic waste were stranded at the NBCT.

Most of the containers were from Canada, while others were from the US, Belgium, Germany, Hong Kong and Japan.

Meanwhile, state environment committee chairman Phee Boon Poh was dismayed to learn that Canada has "no plans" to take back its plastic waste that ended up in Malaysia.

"They were okay to take plastic waste back from the Philippines, but not from Malaysia," he said. 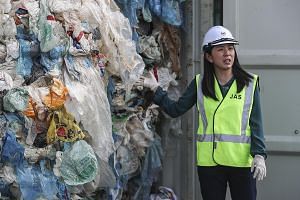 Malaysia cracks down on plastic waste

Phee said he had hosted Canadian High Commission officials during their visit to NBCT on Tuesday (June 11) to inspect the containers.

"The officials were given solutions on how the waste could be sent back to their country, the costs and logistics involved, and even an offer to dispose of them at a state-of-the-art recycling centre here."

"Although it is legally right for Canada to not take the rubbish back, they have a moral obligation to do so," he said.

State local government committee chairman Jagdeep Singh Deo, when asked to comment on the matter, said he has instructed both Penang Island City Council and Seberang Prai Municipal Council to monitor vehicles transporting such waste to ensure that they were sent to the correct place and not dumped.

"I have also requested both councils to submit comprehensive reports on the situation. The reports will include information such as the number of illegal recycling factories in the state as well as those undergoing legalisation.

"We are looking at cases where we can take action against the perpetrators in court. We must make an example of several cases so that it serves as a deterrent to future perpetrators," he said.

A spokesman for Canada's environment ministry said on Friday that Ottawa had no plans to pick up plastic waste that originated in Canada and currently parked in Malaysia.

In an e-mail statement to Reuters, Environment and Climate Change Canada spokesman Gabrielle Lamontagne said there were no plans for the Canadian government to pick up waste in Malaysia.

The spokesman added Canada received no information about any shipment of waste from Canada to Malaysia, and said the ministry has reached out to the Malaysian government for details.

In late May, Malaysia said it would send 3,000 tonnes of plastic waste back to 14 countries of origin, including Canada, the United States, Japan, France, Australia and Britain.