KUALA LUMPUR (THE STAR/ASIA NEWS NETWORK) - A sum of RM1.9 billion (S$626 million) was credited into one of Malaysia's former premier Najib Razak's private bank accounts between 2011 and 2013, the High Court heard on Monday (April 29).

Part of the money was purportedly a donation from one "Prince Faisal al Turki" and the Finance Ministry of Saudi Arabia.

This was confirmed by AmBank manager R. Uma Devi during cross-examination by Najib's counsel Harvinderjit Singh.

Mr Harvinderjit: Refer to this e-mail of bank statement ending 694. Are these transactions from "Prince Faisal al Turki"?

She also agreed that another amount was RM324 million, which was credited from Saudi's Finance Ministry to Najib's account.

To a suggestion, Ms Uma Devi agreed that a letter of instruction purportedly written by Najib on July 30, 2013, had instructed that the donation money be returned to the owner (Prince Faisal Al Turki).

Mr Harvinderjit: On the basis of the letter, it was clear the bank knew the amount of money credited was a donation?

The High Court also heard that Gandingan Mentari Sdn Bhd, a unit of SRC International Sdn Bhd, was subjected to closer scrutiny by a bank as it was a high-risk account. 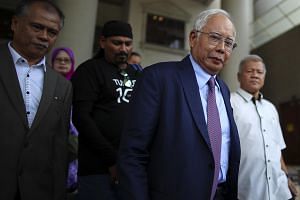 The witness was testifying in cross-examination in the corruption trial of the former prime minister accused of misappropriating RM42 million in SRC International funds.

During cross-examination, Mr Harvinderjit asked the reason why the Gandingan Mentari was considered high risk when it was a new account.

Ms Uma Devi replied that even without much transaction history, risk could still be computed based on certain factors and the category of the business.

"There are some companies that handle lots of cash, like law firms, or have criteria that would get flagged as high risk," she said.

The witness, however, was unable to explain what entailed in the monitoring as she was not with the compliance department.

(According to credit reporting agency CTOS [ctoscredit.com.my], Gandingan Mentari's nature of business is wholesale of a variety of goods without any particular specialisation, real estate activities with owned or leased properties, stock, share and bond brokers.)

Earlier, the court dismissed Najib's application to declare the seven charges against him as defective.

Justice Mohd Nazlan Mohd Ghazali said the defence's argument that the charges were flawed was without basis.

The charges against Najib, he said, did not constitute double jeopardy as the offences were different and any conviction could be secured if the prosecution proved each of the offences.

He added that the charges were not structured in a way that could mislead or prejudice him to a point that the accused could not put up a proper defence.

"The prosecution has produced all the documents to the defence."

"At this stage, the trial has proceeded for nine days and 21 witnesses have been called with extensive cross-examination, with the applications for documents from witnesses that were allowed by this court."

"It is difficult to comprehend that the accused could have been misled," he said.

Justice Mohd Nazlan also said that money laundering, criminal breach of trust and abuse of power were different offences and there was no duplicity.

"For the following broad reasons, this application is denied," he said.

The hearing continues on Tuesday.