NUSA DUA, Indonesia (REUTERS, AFP) - US Treasury Secretary Steven Mnuchin said on Saturday (Oct 13) he still planned to attend an economic meeting in Riyadh this month - despite a growing exodus of top media companies and business leaders after the disappearance of a Saudi journalist.

Mnuchin's plan to attend the high-profile Future Investment Initiative conference in Riyadh follows US President Donald Trump's comments that he saw no reason to block Saudi Arabian investments in the United States despite concern over the welfare of journalist Jamal Khashoggi.

Mnuchin said on Saturday that he still planned to attend the event, but would keep his eye on a probe into the disappearance of Khashoggi.

"Obviously I want to express concern for Mr Khashoggi and his family," Mnuchin told reporters on the sidelines of the International Monetary Fund's annual meetings in Bali.

"We look forward to getting results of this investigation."

But Mnuchin added that he had not changed plans to attend the Oct 23-25 conference in Riyadh, dubbed "Davos in the Desert" after the World Economic Forum in the Swiss resort.

"The answer is for now I am still going," Mnuchin said.

"If more information comes out over the next week, I will obviously take that into account."

IMF managing director Christine Lagarde said on Saturday she has not cancelled her plans to attend the same conference, but will be “very attentive” to any new information about the disappearance of Khashoggi.

“At this point in time, my intention is to not change my plan and to be very attentive to the information that is coming up in the next few days,” she told a news conference when asked whether she would attend the conference after several media companies and business leaders pulled out.

“Horrifying things have been reported, and I am horrified,” Lagarde said of media reports about Khashoggi’s disappearance.

“But I have to conduct the business of the IMF in all corners of the world and with many governments.”

In a letter to Trump, the leaders of the US House of Representatives Foreign Affairs Committee said Mnuchin should cancel plans to attend the conference unless Saudi Arabia fully discloses what it knows about Khashoggi's disappearance.

"We urge you to use all pressure necessary to encourage greater Saudi cooperation in the investigation into this incident," said the committee's chairman, Republican Ed Royce, and its top Democrat Eliot Engel.

Pressure has mounted on US ally Saudi Arabia since Khashoggi, a critic of Saudi policies, went missing.

He was last seen entering the Saudi consulate in Istanbul on Oct 2. Turkish officials have said Khashoggi was murdered inside the consulate.

Riyadh has said the claims are baseless.

CNN, the Financial Times, the New York Times, CNBC and Bloomberg, as well as reporters and editors from the Economist, said they were no longer participating in the conference, which relies heavily on journalists to moderate top sessions.

CNBC and Bloomberg, along with Fox Business Network, were among media partners with a big role at the event, which begins on Oct 23.

Entrepreneur Arianna Huffington will also not participate and has resigned from the conference advisory board, her company Thrive Global PR said. 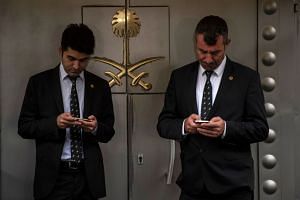 The absence of media and technology executives is likely to cast a shadow over the three-day conference, known as "Davos in the desert", which has become the biggest show for investors to promote Saudi Crown Prince Mohammed bin Salman's reform vision.

It has attracted some of the world's business elite, including Wall Street's top bosses and executives from multinational media, technology and financial services companies.

On Friday, conference organisers removed all the names of attendees from its website as the number of cancellations grew.

"Whilst it is disappointing that some speakers and partners have pulled out, we are looking forward to welcoming thousands of speakers, moderators and guests from all over the world to Riyadh," a Future Investment Initiative spokesperson said.

World Bank president Jim Yong Kim, listed as a speaker, will not go to Riyadh due to a scheduling conflict, a World Bank official said on Friday.

Asked about business leaders' doubts about the conference, a Saudi diplomatic source said late on Thursday that he hoped a joint Turkish-Saudi investigation into the affair could reach a conclusion before the event began.

However, the fallout over Khashoggi's welfare shows signs of extending beyond conference participation. British billionaire Richard Branson said his Virgin Group would suspend discussions with Saudi Arabia's Public Investment Fund over a planned US$1 billion investment in the group's space ventures.

On Wednesday, former US energy secretary Ernest Moniz said he had suspended his role on the board of Saudi Arabia's planned mega business zone NEOM - another of Prince Mohammed's large projects - until more is known about what happened to Khashoggi.

While many media and technology executives have abandoned the conference, the financial industry showed no signs of doing so.

None of the financial firms whose senior executives were scheduled to speak said they had made any changes to those plans when contacted by Reuters.

Europe's biggest bank, HSBC, declined to comment on whether CEO John Flint is still attending. HSBC is a 'strategic partner' of the event, along with Credit Suisse, whose CEO Tidjane Thiam is still planning to attend, according to a source familiar with the matter.

JPMorgan Chase & Co CEO Jamie Dimon was scheduled to speak, as was Mastercard Inc CEO Ajay Banga. Representatives for those companies, as well as Bank of America , Citigroup, Goldman Sachs and Morgan Stanley did not respond to requests for comment. Siemens AG said CEO Joe Kaeser still planned to attend.

Private equity company Blackstone did not immediately respond to a request for comment on whether CEO Stephen Schwarzman would still speak at the event.

A spokesman for the London Stock Exchange, whose CEO David Schwimmer is also a speaker, declined to comment.

The exchange has been working for years to attract the listing of Saudi state oil major Aramco.

The City of London, Britain's financial district and one of the main lobbyists for the country's finance sector, said it is urgently seeking more information on Khashoggi. Its leader Catherine McGuinness is due to attend the conference.