"There was no money missing from the GST collection," PAC chairman Noraini Ahmad said in a statement just before the committee released a report on the matter.

The former Barisan Nasional (BN) government had overestimated the GST revenue generated and experienced a shortfall.

It then used the GST refund money, which had been moved to the government’s consolidated account instead of the GST refunds account, to pay for development and management costs.

"The previous government had overestimated the GST revenue by 65 per cent," said Datuk Noraini, an Umno MP who took over as PAC chairman in April this year.

She added that the delay in refunding companies was to ensure that Malaysia's cash flow was not negative.

Allegations of impropriety emerged in August last year when Finance Minister Lim Guan Eng told Parliament during a debate to abolish the GST that the previous BN government had been stealing tax refunds that were meant to have been returned to businesses. 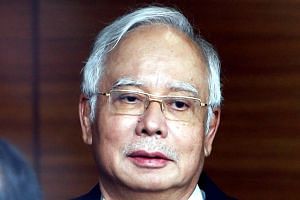 He said the GST refunds were not paid for two years because 93 per cent of the money had not been placed into the correct account.

And as of May 31 last year, the outstanding GST refund amount stood at RM19.39 billion while there was only RM1.486 billion left in the repayment fund, Mr Lim added.

Najib had denied the allegations in Parliament, stating that the money was put into the government's consolidated fund, which was paid out to a trust fund.

In the report released Monday, Attorney-General Tommy Thomas said that the previous government's move to channel GST revenue into the federal government’s consolidated account was wrong.

In a letter dated October 9, 2018 to the PAC, Mr Thomas said it was a breach of fundamental trust law principles and trust accounting requirements, and that “criminal liability must be further considered.”

PH lawmakers said that the authorities must investigate the BN officials responsible for violating the GST refund rules.

The PAC began a probe on the matter on Sept 12 last year, calling in 10 witnesses including the Finance Minister.

Following the statement from the PAC, opposition leader and Umno lawmaker Ismail Sabri Yaakob on Monday moved a motion in Parliament to refer Mr Lim to the Rights and Privileges Committee for misleading the House.

“The PAC report on GST refunds today (showed) that there is no disappearance or robbery as claimed by the minister,” he said. “As such, the opposition would like to... refer the minister to the Rights and Privileges Committee.”

Umno lawmaker Khairy Jamaluddin asked that a decision be made in the current sitting, which concludes Thursday, to which the deputy speaker Nga Kor Ming replied: “I give my assurance that the decision will be made in line with the law.”

The administration of Prime Minister Mahathir Mohamad abolished the unpopular GST system as part of its manifesto promises, after winning the May 9 General Election last year.

But in September, it reintroduced the sales and services tax (SST), drawing much criticism from many ordinary Malaysians who described it as worse than the GST.

As of February this year, the Pakatan Harapan government has paid RM7.9 billion worth of GST and income tax refunds.