When a vivacious Miss Thailand strutted on stage in an outrageous tuk tuk costume - complete with headlights and handlebars - during the Miss Universe pageant in 2015, netizens responded with derision and laughter.

But Ms Aniporn "Nat" Chalermburanawong had the last laugh when she went on to bag the Best National Costume prize at the competition in Las Vegas for her celebration of the three-wheeled vehicle commonly seen on the streets of Thailand.

This year, Miss Vietnam 2017 H'Hen Nie is steering down a similar path at the upcoming Miss Universe pageant in Thailand next month for picking an equally wacky theme to represent her country's culture in the national costume segment: banh mi, a popular Vietnamese baguette sandwich.

In photos she posted on her social media accounts on Nov 22 when she unveiled her outfit, she appears to be hemmed in by three baskets of baguettes, some clamping meat and vegetable fillings. Emerald green fabric, which likely represents some sort of vegetable, gathers around her waist.

The dress was chosen over five other more elegant-looking contenders, including lantern and dragon costumes. The outfit has caused a stir online, including some who thought it looked ugly, VnExpress reported.

Explaining her choice, Ms H'Hen Nie was reported by Viet Nam News as saying: "Whether you go to the poorest areas of the North and Central Highlands, or the most exquisite places of HCM (Ho Chi Minh) City and Hanoi, you will find the presence of bread. For foreigners, seeing banh mi and pho (noodles) they will think of Vietnam."

The costume, which was designed by Pham Phuoc Dien, inspired several memes featuring the beauty queen wearing a gamut of Vietnamese street food. 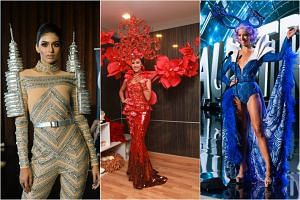 One supporter by the name Thuy Le said: "I love the idea and the dress, it's impressive and different. That costume well reminds everyone of Vietnamese tradition. I believe we can win the prize."

Miss Universe 2018, the 67th edition of the international pageant, will be held at the Muang Thong Thani complex in Nonthaburi on Dec 17.