MANILA - The Philippines’ midterm elections kicked off on Thursday (Oct 11) in what is seen as a test of public support for President Rodrigo Duterte, amid a sputtering economy and setbacks in his efforts to tackle illicit drugs and cut state corruption.

Politicians seeking seats in Congress trooped to offices of the election commission to file their candidacies.

Twelve of the 24 seats in the Senate and all 297 seats in the House of Representatives are up for grabs. Candidates will also contest for some 18,000 local posts across the country.

The opposition, led by the Liberal Party of former president Benigno Aquino III, is hoping to capitalise on growing dissatisfaction with Mr Duterte’s government to claw more seats in Congress, but it is facing an uphill struggle.

Most of its bets are faring poorly in public opinion surveys, except for one: Mr Mar Roxas, who ran for president in 2016 but lost to Mr Duterte.

Mr Duterte’s own political party, PDP-Laban, is not fielding a full Senate slate. But it is expected to keep its “supermajority” in Congress, through allies from other parties who back Mr Duterte’s agenda, including former president Gloria Arroyo and the Marcos family.

It is hoping to bolster its own ranks, as Mr Duterte’s daughter, Davao Mayor Sara Duterte, is guaranteed a Senate seat, based on recent polls.

Ms Duterte has yet to declare her intention to run for senator. But in recent months, she has been manoeuvring to build alliances and expand her small party into a new political juggernaut, as fissures appear in her father’s ruling party.

Foreign Minister Alan Peter Cayetano, a former senator, is running for a seat in the House of Representatives. He said he intends to bolster Mr Duterte’s hold on Congress by campaigning to become House Speaker.

Two years into his six-year term, Mr Duterte’s popularity has so far been supported by a strong economy, rising wealth and a tough anti-drug and anti-crime stance.

But recent opinion polls showed his popularity may be waning, especially among the poor and middle class as they reel from soaring prices of basic goods. 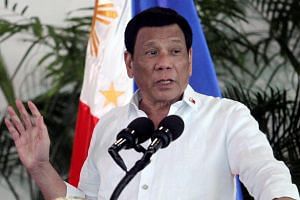 My only sin is the extra-judicial killings: Philippines leader Rodrigo Duterte

What Duterte can learn from Mahathir: Philippine Daily Inquirer columnist

Inflation has hit a nine-year high, after climbing for nine consecutive months. Prices began rising at the start of the year, with higher oil prices and tax increases on fuel, sugary drinks and cigarettes. Pressure quickly moved to rice, the staple food, because of supply shortages.

Vegetable prices have gone up nearly 20 per cent, fish prices 12 per cent and meat prices 7 per cent.

Alongside a more than 7 per cent slump in the currency this year, consumers are hurting.

“I don’t see a collapse in Duterte’s popularity, but there’s sense of vulnerability on the part of the government, as inflation is creating a lot of disgruntlement on the ground… He seems particularly more vulnerable now that the economy is hurting because this is a gut issue,” said political analyst Richard Heydarian.

The government is now scrambling to get on top of the problem. On Tuesday, Mr Duterte ordered restrictions dropped on the importation of rice. Import rules on sugar are being eased, while police have been roped in to check for overpricing.

“Mid-term polls generally generally serve as a referendum on the government’s performance… The performance of key allies (in the elections) will be closely watched as an indicator of the president’s popularity,” said Mr Heydarian.