KUALA LUMPUR (AFP) - A new hunt for flight MH370 is expected to end by mid-June, Malaysian authorities said on Saturday (March 3), as families marked four years since the disappearance of the plane amid renewed hope.

The Malaysia Airlines jet disappeared on March 8, 2014 with 239 people - mostly from China - on board, en route from Kuala Lumpur to Beijing.

No sign of the plane was found in a 120,000 square kilometre sea search zone and the Australian-led hunt, the largest in aviation history, was suspended in January last year.

But the Malaysian government struck a "no find, no fee" deal with exploration firm Ocean Infinity to resume the search in an area north of the original zone, that scientists now believe is the likeliest crash site.

The hunt restarted in January, with a research vessel deploying eight high-tech drones to scour the seabed.

Officials had said the search would last a maximum of 90 days.

Speaking as families marked four years since the plane disappeared in the Malaysian capital, the country's civil aviation chief Azharuddin Abdul Rahman said that this would be spread over several months as the ship needed to stop sometimes to refuel. 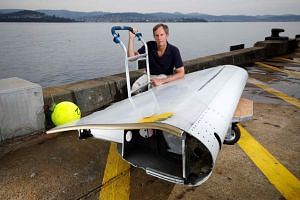 The hunt is expected to end by mid-June, he said.

"Hopefully, we will be able to identify the location of MH370," he said at the anniversary event at a Kuala Lumpur shopping mall.

At Saturday's event, relatives of the missing passengers spoke of their continuing sense of pain and loss.

But the new search meant there was also a glimmer of hope.

Jacquita Gonzales, whose husband Patrick Gomes was a steward on the flight, told the event she was "grateful" to the Malaysian government they had restarted the search.

"They have not given up hope, and neither have we."

K.S. Narendran, whose wife Chandrika Sharma was on the flight, was more cautious.

"Am I hopeful? It's hard to say - there are a number of 'ifs'," he told Agence France-Presse.