BANGKOK (REUTERS) - When Thai voters go to polls on March 24 in the first elections since a military coup, there will be at least three parties on the ballot openly campaigning to keep the military in power through democracy.

At a recent rally of the pro-army Palang Pracharat party, a speaker laid out the case for electing junta leader Prayut Chan-o-cha, who seized power from an elected government when he was army chief in 2014 in the second coup in a decade.

"Throughout his time in power, the country has been at peace and he has worked for the people," party co-founder Suriya Juangroongruangkit told thousands of supporters in Samut Prakan, a province south of Bangkok.

"This kind of dictatorship, the kind that benefits the people, do you all want him? Do you want him to stay in power?" Suriya asked.

The crowd enthusiastically shouted approval. And they could get their way in the general election.

After two coups and years of military rule, it might seem counterintuitive that a significant segment of Thai voters would want to enshrine military rule with a democratic stamp of approval, a sort of hybrid, martial democracy.

But pro-military parties have a built-in advantage under new electoral rules written by the junta. 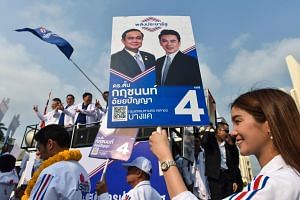 They have also made powerful campaign appeals invoking traditional Thai values of loyalty to the monarchy and seeking harmony instead of conflict.

Thai politics has been anything but harmonious in the past 15 years, with both opponents and supporters of ousted former premier Thaksin Shinawatra taking to the streets and at times paralysing government and commerce.

Polarisation between the largely rural-based "red shirt"supporters of Thaksin and mainly urban-based "yellow shirts", who support the royalist military establishment, has resulted in outbreaks of violent protests, judicial intervention to oust governments and the two coups.

Thaksin himself lives in self-imposed exile after being toppled in a 2006 coup and convicted of corruption. Parties loyal to his populist policies have kept on winning elections.

The upcoming election marks the first time that anti-Thaksin parties have so directly campaigned for an army-linked government.

"This election is in a way a referendum on the military government and the military coup over the four and a half years," Thitinan Pongsudhirak, a political analyst at Chulalongkorn University told Reuters.

As the junta leader, Prayut has not officially campaigned for Palang Pracharat, but he has made references to staying on in his job.

"Could I have the love and unity back? Could there be no more conflicts? Promise me and the country. I will bring the country forward," a smiling Prayut told supporters in northeastern Khon Kaen province as he visited a new train station.

"Who is still with me?" he asked at another point, prompting applause. He later posed for selfies with supporters.

Palang Pracharat, which was formed last year, has been using nationalism, which is centred on the three pillars of nation, Buddhism and the monarchy, as a device to promote Prayut as well as to tarnish their opponents.

Some party rallies have recently started playing not only the national anthem but also the anthem of King Maha Vajiralongkorn, who is to be officially crowned just six weeks after the election, after taking the throne upon the death of his revered father in 2016 after a 70-year reign.

Thailand ended absolute monarchy in 1932, but reverence for the king is deep-rooted and the military portrays itself as the guardian of the monarchy.

Palang Pracharat groups former cabinet ministers of the military government as well as veteran politicians from established parties. It argues that it can close the chapter on the Thaksin era and rid the nation of conflict.

In arguing for keeping Prayuth in power, it gives an alternate vision to anti-Thaksin voters who have previously supported the pro-establishment Democrat Party.

Conservative Thais who filled the ranks of the yellow shirt protests abhor the confrontational-style and what they see as profligate policies of the former telecommunications tycoon Thaksin, who they accuse of buying election victories with handouts.

"Before the coup, there were lots of problems in parliament and also many protests," Suporn Atthawong, 54, a former pro-Thaksin activist now running for a constituency seat for Palang Pracharat in north-eastern province of Nakhon Ratchasima told Reuters.

"They called it democracy, but in reality it was a parliamentary dictatorship," he said.

In questioning the efficacy and cultural value of democracy, Thailand's pro-military parties hint at a throwback to old-style "strong man" government in a region that has seen a new authoritarianism, characterised by Philippine leader Rodrigo Duterte and Cambodia's Hun Sen.

Prayut can count on the support of at least two other newly created parties - the People's Reform Party and the Action Coalition for Thailand Party.

Perhaps most importantly, he stands to benefit from electoral rules that allow the junta to appoint the entire 250-seat upper house Senate, which would give him a big head start in the race to 376 votes in parliament - 50 per cent of seats in both houses, plus one - needed to choose the prime minister.

But the pro-military parties are by no means guaranteed an election win.

The main pro-Thaksin Pheu Thai party, which was ousted from power in 2014 and in 2006, retains solid support.

Pheu Thai's main prime ministerial candidate, Sudarat Keyuraphan, said her party was contesting despite the military dominance of the process because it thinks it can gain enough seats to form a coalition with other parties seeking to end military rule.

"There are many new parties. But in the end, there are only two choices - a choice extending Prayut's rule ... and the other choice is those parties that want to end the dictatorship," Sudarat said.