PETALING JAYA (THE STAR/ASIA NEWS NETWORK) - TRX City Sdn Bhd, a company parked under Malaysia's Ministry of Finance, said on Thursday (June 21) that it will lodge a police report on allegations that funds meant for the development of a project called Tun Razak Exchange (TRX) were instead used to repay the loans of state fund 1MDB.

TRX City issued the statement after Finance Minister Lim Guan Eng said earlier that the TRX project would be completed, although more than RM3.1 billion (S$1.05 billion) of its funds were misappropriated by 1MDB.

"Our investors will view this commitment positively as it confirms the government's pro-business plans," he said.

Mr Lim had said that TRX City's former parent company 1MDB has used funds meant for the project was stripped and used to pay part of 1MDB's debts.

"This project is a classic example of how 1MDB has used its (funds) to pay off debts not related to this project," Mr Lim had said.

TRX City was a subsidiary under 1MDB before it was transferred to the Finance Ministry in March last year. 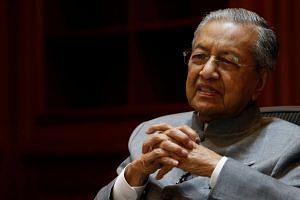 Najib's signature all over 1MDB documents, impossible that he didn't know what was going on: Mahathir

Mr Lim said his ministry will now inject up to RM2.8 billion into TRX City to ensure the completion of the project.

Former prime minister and finance minister Najib Razak, who started 1MDB in 2009, said in a Facebook posting on Thursday that "no monies from TRX City were misappropriated by 1MDB".

Datuk Seri Najib claimed that Mr Lim "has been spreading half truths and outright lies" about the project.