Mohd Sani said that he was bitten by a cobra at 7.54pm on Monday and was sent to Sultan Haji Ahmad Shah Hospital.

Abu Zarin, who was attached to Temerloh fire station, became a viral sensation after he was featured on Internet portals from around the world as well as British tabloids The Daily Mirror and The Daily Mail.

The articles mistakenly identified him as a Thai man who had married his pet snake as he believed it was his dead girlfriend due to its "striking resemblance" to her.

Unfortunately, the images used were actually of Abu Zarin and his pet snake. And no, he was not married to it.

Abu Zarin had conducted snake catching and training classes for firemen, who are often called up to capture the serpents by members of the public who find them in homes or public places. 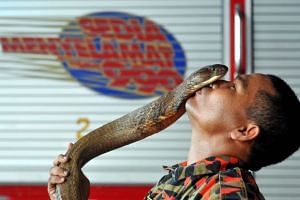 I did not marry snake that resembled dead girlfriend, says Malaysian firefighter

During those sessions, he taught firemen how to identify the different snake species, especially the venomous ones and their bites, and ways to capture them without killing them.

Abu Zarin's talent in handling snakes even found him a spot at the quarter finals of television program Asia's Got Talent.

It is learnt that Abu Zarin has been at the receiving end of snake bites before.

Abu Zarin's body has been transported to his hometown in Kampung Permatang Gading, Pasir Putih, Kelantan to be buried after Friday prayers.