KUALA LUMPUR - Malaysia's decision to withdraw from ratifying the Rome Statute of the International Criminal Court (ICC) was a political move made to avoid a coup attempt, Foreign Minister Saifuddin Abdullah said in a media interview on Saturday (April 6).

"(There was the) possibility of the issue being manipulated to the extent that people go to the streets, moved by the 'deep state' and certain apparatus," Datuk Saifuddin told Malay Mail and several other media outlets. He declined to clarify his definition of "deep state".

The term generally refers to secretive elements of a country's security and bureaucratic establishments working to undermine the legitimate government.

"I would keep it that way, let the 'rakyat' decide," Mr Saifuddin told Malay Mail and the other media.

The Pakatan Harapan (PH) secretariat chief said that critics have been engaging in a political move "to get the rulers to back them up", but he also added that some members of the royal family may be involved.

Malaysia had earlier signed the treaty but had yet to ratify it.

Prime Minister Mahathir Mohamad announced last Friday (April 5) that the government had decided to make a U-turn due to pressure from parties politicising the issue, The Star newspaper reported.

Its abrupt turnaround came after a backlash from the country's royals and opposition politicians who argued that the treaty threatens the sovereignty of the Malay rulers. 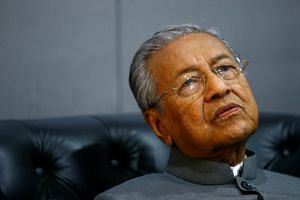 Malaysia withdraws from the Rome Statute of the International Criminal Court

The ICC has jurisdiction over genocide, war crimes, crimes against humanity and crimes of aggression.

The Star reported that the Cabinet had discussed long and hard at a meeting last Friday before deciding to withdraw from ratifying the statute.

"Pakatan Harapan won the federal government through an election and not a revolution, and when there are parties such as the opposition whipping up political sentiments using the issue of Malay Rulers, religion and race, we have to concede and make the best decision for now to calm the public," The Star reported, quoting a source.

The Malay Mail reported that among those present at the rulers' meeting last Friday was Johor Crown Prince Tunku Ismail Ibrahim, who has been a frequent critic of the Rome Statute.

Malaysia has until June to withdraw from ratifying the treaty, the Malay Mail reported.

As at March 18 this year, 122 countries were party to the Rome Statute. Countries that have not acceded include the United States, China, Russia and India.