KUALA LUMPUR - Four Malaysian opposition parties on Wednesday (Sept 26) unveiled a shadow Cabinet, the first in the country's history, which they say will play a check and balance role on policies being pursued by the Pakatan Harapan (PH) government.

The parallel Cabinet has been formed by the three members of the Barisan Nasional opposition coalition, and a former BN faction Parti Bersatu Rakyat Sabah (PBRS).

"The committee will play a check and balance role for each ministry. It will serve as 'policy watch' and formulate alternative policies to compete with Pakatan Harapan," he said, as quoted by the Malaysian media.

Tan Sri Annuar invited opposition parties from Sarawak and Sabah, which have formed their own alliances, to also join in.

In previous years when BN was in power, then opposition parties such as the Democratic Action Party and Parti Keadilan Rakyat had scoffed at the idea of a shadow Cabinet, as practised in countries following the Westminster style of Parliament. They preferred to jump in on major issues that have raised the public's attention. 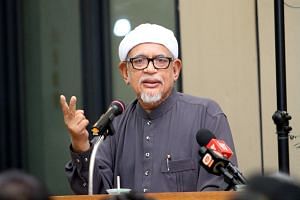 In the list of appointments released on Wednesday, former youth and sports minister Khairy Jamaluddin has the finance portfolio, and is tasked with drafting an alternative Malaysian Budget. Malaysia is expected to present next year's Budget in November.

Former prime minister and finance minister Najib Razak, who is facing charges of graft and money laundering, has been left out. He is still a Member of Parliament.

Other MPs took up posts which mirrored their previous appointments when BN was in power.