Tam, who is estimated to be in its mid-30s, showed some improvement in the last two days after it was put in intensive care. The Sabah Wildlife Department on Sunday (May 19) said the rhino was in critical condition.

Sabah Wildlife Department director Augustine Tuuga said the main concern was its age, as rhinos generally have a lifespan of between 35 and 40 years old.

Mr Augustine, in a text reply on Tuesday (May 21), said: "I have received the following update from the veterinarian; Tam has improved slightly over the past two days as a result of intensive care.

"But the problem is age-related. We do not expect it to survive for much longer. The time-frame is likely to be in the days rather than weeks (before its demise)."

Tam and the female rhino Iman are the only two Sumatran rhinos in captivity in Malaysia.

The elusive species has been considered extinct in the wild in Malaysia, given that no Sumatran rhinos were detected in Sabah's wilderness in recent years. 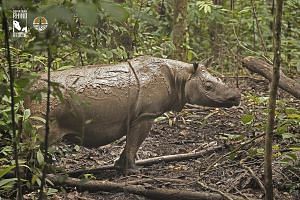 Over the years, the authorities have been trying to engage with Indonesia in rhino preservation, with a focus on advanced reproductive technology, including in-vitro fertilisation (IVF).

Despite claims of ongoing government-to-government talks, efforts have been unsuccessful so far, and nothing concrete has been achieved on the matter.