KUALA LUMPUR - Malaysia's de facto Islamic Affairs minister Mujahid Yusof Rawa is on the defensive after being accused of visiting an internment camp built by Chinese authorities for its Uighur minority and calling it a "training centre", a description that dovetailed with Beijing's claim.

Rights group Amnesty International and a senior Pakatan Harapan (PH) colleague have slammed him for being unaware that the Muslim Uighurs are forced to enter these camps, with reports saying there are more than one million detainees.

The minister pushed back against his critics on Monday (July 1), saying in a statement issued by his office that the media had made wrong assumptions.

His June 23 and 30 visit came about as the Malaysian government turned more friendly towards Beijing, after ties chilled for some months following Pakatan Harapan's (PH) victory in the general election in May last year.

"It is regrettable that the minister in charge of Islamic affairs describes concentration camps in the Xinjiang province in China as 'training centres' for the Uighurs," Mr P. Ramasamy, Penang deputy chief minister II and a senior member of PH said last week. "It appears that Malaysia is willing to modify its policy on Muslims in general when it suits its political and strategic purpose." 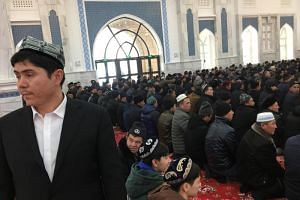 "In those camps, they are subjected to forced political indoctrination, renunciation of their faith, mistreatment, and, in some cases, torture," said Ms Shamini Darshni Kaliemuthu, executive director of Amnesty International, in a statement. "Amnesty International has first-hand knowledge that the Chinese authorities have detained Uighurs and other Turkic Muslims - outside any legal process," she added.

In a statement on his Facebook account on Monday, Mr Mujahid's office said the visit to an Uighur camp visit was just one aspect of his trip to China. The visit, he said, was meant to strengthen cooperation between both countries in the fields of peace, religion and socio-economics.

He said he was accompanied by the director-general of the Malaysian Islamic Development Department (Jakim) and received advice from the Malaysian foreign ministry.

Mr Mujahid, in a speech last week at the Beijing Foreign Studies University, had made a comparison between news reports about Muslims in China and Hindus in Malaysia.

He was quoted as saying: "False news in China about Muslims being oppressed could trigger a wave of sympathy for the oppressed and affect relationships.

"Meanwhile false news about Hindu followers being treated unjustly by Muslims in Malaysia, for example, could trigger hatred towards the Muslim minority in India."

Defending himself over the remarks, the minister said he was referring to Muslims in China in general. The Uighurs, according to a November 2018 BBC report, comprise 11 million people.

Mr Mujahid's office said: "For the record, China has approximately 20 million Muslims from various ethnic groups and has also 30,000 mosques and thousands of imams."

The statement added that in a meeting with a top Chinese official, Mr Mujahid "stressed on freedom of religion and also on respecting one's rights to practice its religion".

It added: "This is the first time a minister from Malaysia spoke about religion to a Chinese representative."