KUALA LUMPUR (THE STAR/ASIA NEWS NETWORK) - Malaysia's Finance Ministry has discovered dubious payments made in two pipeline projects, with nearly 90 per cent of the contracts worth RM9.4 billion (S$3.2 billion) being paid out but only 13 per cent of the work being completed.

The projects - one multi-product petroleum pipeline running from Melaka and Negeri Sembilan to Kedah, and a gas pipeline from Kimanis to Sandakan and Tawau, all in Sabah - were handled by Suria Strategic Energy Resources (SSER), a wholly owned subsidiary of the Ministry of Finance.

Both projects were approved by the Cabinet in July 2016, under the previous Barisan Nasional administration.

They are believed to form part of the projects kept as "red files", hidden away from the scrutiny of most Treasury officials during the administration of former premier Najib Razak. Datuk Seri Najib was also Finance Minister during his nine years at the helm.

"I have instructed my officers to file a report with the Malaysian Anti-Corruption Commission," said new Finance Minister Lim Guan Eng in a statement issued on Tuesday (June 5).

"The Board of Directors (of SSER) and Tan Sri Irwan Serigar in particular, must answer as to why SSER signed such a lopsided contract that clearly jeopardises the interest of the Malaysian people and government.

"In addition, we would seek the assistance of former Finance and Prime Minister, Datuk Seri Najib Razak, who has been active on Facebook recently, to explain how he could possibly approve the above transactions,” Lim said.

According to the statement, the projects were awarded to China Petroleum Pipeline Bureau (CPPB) in November 2016. The agreements were signed by the then Treasurer-General Irwan Serigar Abdullah, who was also chairman of SSER. Tan Sri Irwan resigned from his post on May 23, after the Pakatan Harapan government was voted in on May 9.

SSER secured 85 per cent of funding for both projects from China Exim Bank in March 2017, while the remaining 15 per cent was to be raised by issuing sukuk, or Islamic bonds.

Both the China Exim Bank borrowings and the sukuk are secured by federal government guarantees. 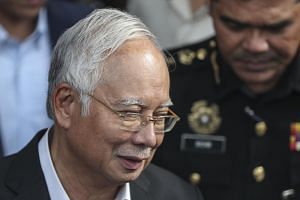 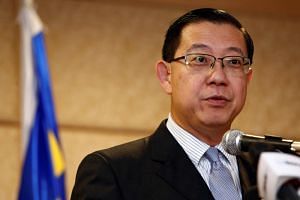 In a briefing on May 28 to Treasury officials, SSER said that work on the three-year projects began in April 2017.

"We have discovered that the payment schedules for the above contracts are based almost entirely on timeline milestones, and not on progressive work completion milestones. Worse, based on the agreements signed, 85 per cent of the project value would be paid by March 1, 2018," Mr Lim said.

The total sum paid of RM8.25 billion constitutes a staggering 87.7 per cent of the total project value, despite an average completion rate of only 13 per cent, with another two years of the contracts to go.

The completion rates, however, have yet to be verified or audited.

Additionally, Mr Lim noted that the payments did not cover another RM1 billion worth of agreements - two for consultancy services for the same projects worth about RM312 million and RM213 million, and a maintenance contract worth RM476 million - also awarded to companies from China.

Mr Najib, responding to the allegations in a Facebook posting yesterday said he was “confident that all necessary process procedures and laws have been complied with” in the two pipeline projects.

He said the two projects were negotiated on a government-to-government basis with China.