"It is clear that the previous government conducted an exercise of deception to the public… and even misrepresented the financial situation to Parliament," Mr Lim said on Tuesday (May 22) in his first statement as minister.

The Finance Ministry, which owns the troubled state fund, had serviced the debt since April last year. Another RM143.75 million in interest is due by the end of this month.

Mr Lim said this confirmed "the public suspicion that 1MDB had essentially deceived Malaysians by claiming that they have been paid via a 'successful rationalisation exercise'", referring to its sale of assets, including prime land and power plants, as part of efforts to pare down debts.

Last December, 1MDB said a payment to Abu Dhabi fund International Petroleum Investment Company (IPIC) was "from proceeds of the ongoing rationalisation programme". However, a payment list released by Mr Lim showed that the Finance Ministry had stepped in to pay IPIC RM5.05 billion in four tranches.

"Arul Kanda has to date insisted that 1MDB is fully able to service its debt obligations," he said, referring to 1MDB's chief executive. 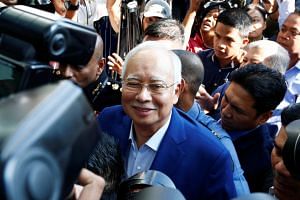 Malaysia's ex-premier Najib leaves anti-graft agency after 5 hours; will be back for questioning on Thursday 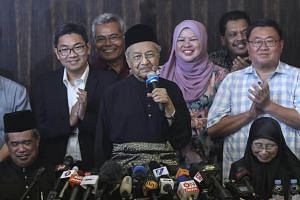 The Straits Times understands that Mr Arul has been called to brief the ministry today on how 1MDB will settle the interest payment due next week.

Just one day into the job, Mr Lim said the Finance Ministry and Auditor-General's Office were denied access to certain accounts and reports, and that the nation's debt was far larger than previously reported.

"There were also complaints that certain 'red' files were accessible only to certain parties, which impeded officials and auditors from carrying out their responsibilities," he said.

He confirmed Prime Minister Mahathir Mohamad's assertion that Malaysia's debt had hit RM1 trillion, saying this was revealed during "the discovery exercise" which involved opening up all files, including the so-called red ones, to consolidate accounts. Part of the debt, Mr Lim said, is also due to Malaysia's mega projects.

"We need to have a reassessment of these projects as they are also a contributory factor to our debts," he said.

The huge debts and the new Pakatan Harapan government's plan to do away with the goods and services tax (GST) may put a dent in government revenue.

Ratings agencies are already flagging warning signs, with Moody's saying the reintroduction of the sales and services tax (SST) to replace the GST would see Malaysia losing revenue of 1 per cent of gross domestic product this year, if SST comes in by July.

Higher oil prices are providing a temporary buffer for the country to cushion losses, but it cannot be a permanent substitute for the GST given the "volatility of prices", Moody's said.

The SST is likely to make its return this year, he added.