KUALA LUMPUR  - Malaysia’s MPs on Tuesday (July 16) approved a legal amendment to lower the voting age to 18, from 21 previously.

The amendment was passed by all 211 lawmakers present in the Lower House of Parliament, marking the first Bill in Parliament to receive multi-partisan support since the Pakatan Harapan (PH) government took power in May last year.

The amendment also included provisions for voters to be automatically registered on electoral rolls and for candidates to be eligible to stand for election from 18 years of age.

Millions of new voters will be eligible to vote at the next general election once these changes are implemented.

“The government estimates that for the next five years, if automatic voter registration is concurrently implemented with lowering of voting age to 18, as many as 7.8 million new voters will be added into the electoral roll by 2023”, said Prime Minister Mahathir Mohamad in his speech in Parliament on Tuesday.

The administration estimates that the number of registered voters will reach 22.7 million by 2023, representing about 75 per cent of Malaysia’s 30 million citizens.

The amendment to the Federal Constitution required a two-thirds majority in Parliament, or 148 of the 222 seats. PH and its allies control 139 wards, and were nine votes short of the majority needed. Opposition parties were unanimous in their support, with no abstentions or dissenting votes cast.

“It’s an important move to empower youths especially in the context of voicing their needs and aspirations in the ballot box. This includes job opportunities, cost of living, education and other matters that relate to them,” said Umno MP Hishammuddin Hussein. 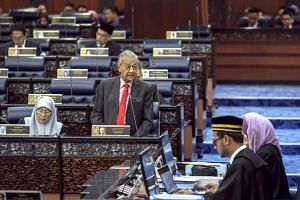 Malaysia seeks to lower voting age from 21 to 18

Seeking floorwide support to get the amendment through, Tun Dr Mahathir said: “Though we have different political affiliations, we can agree together for the good, prosperity and welfare of Malaysians. Let us create history in Malaysia today.”

During the motion’s debate, lawmakers from both sides agreed that 18-year-olds should be allowed to vote but cautioned that sufficient education on politics and democracy is needed among the youth.

Dr Mahathir said in his speech that the Election Commission will conduct democracy awareness initiatives for young Malaysians from primary school age onwards.

In response to a query raised by lawmakers about mandatory voting, he said the government has no plans to enforce mandatory voting and that the decision to vote should be “voluntary”.

“The government first needs to study the suitability of implementing mandatory voting before making any decisions,” Dr Mahathir told Parliament.

Lowering the voting age to 18 was one of PH’s key pledges in the run-up to the general election in May last year.

“The amendment is proof that the Pakatan Harapan government is serious in realising promise 17 in the Buku Harapan,” said Dr Mahathir in his wrap-up speech, referring to the coalition’s election manifesto.

The move to lower the voting age to 18 will bring Malaysian in line with most countries in the region and the world. Singapore has maintained its voting age at 21, while Indonesia’s voting age is 17.

“Today signifies that the youth are no longer seen as a burden but can be trusted with Malaysia’s progress”, said Syed Saddiq Syed Abdul Rahman, Minister of Youth and Sports.