The 61-year-old former top civil servant will be in court on the same day as his former boss, Najib Razak, who will be facing a fresh round of charges, also linked to troubled state fund 1MDB.

It is learnt that both Tan Sri Mohd Irwan and former prime minister Najib will be charged in connection with 1MDB's dealings with Abu Dhabi's sovereign wealth fund, International Petroleum Investment Company (IPIC).

According to national news agency Bernama, quoting sources, the two men have been summoned for questioning at the Malaysian Anti-Corruption Commission (MACC) headquarters in Putrajaya on Wednesday.

It could not be confirmed if Najib - who will be facing six more charges - and Mr Irwan will be charged separately or jointly.

Najib is already facing 32 charges of criminal breach of trust, corruption and money laundering, all charges to which he has pleaded not guilty.

Najib was to have returned to the MACC headquarters on Tuesday afternoon, after his session with the Public Accounts Committee in Parliament in the morning. 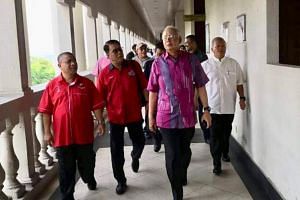 Malaysia's ex-PM Najib vents frustration at being blamed for 'everything'

Najib charged: A timeline of events leading to his arrest

Sources with knowledge of the case said a final round of statements would be recorded from the former PM.

"After this is completed, he will be released and will go to court on Thursday. There are no plans to detain him on Wednesday," a source told The Star.

While sources did not divulge the actual amount, the money involved in the six charges will "run into billions".

"A lot of money is involved here," said one source who declined to elaborate.

Last week, Najib was called up twice to explain the payment of more than US$1.2 billion (S$1.7 billion) made to IPIC by 1MDB in a settlement over a US$6.5 billion claim made by IPIC.

The settlement was triggered by 1MDB's default on a bond payment due in 2016, which was guaranteed by IPIC in 2012 for the acquisition of two power plants.

It is understood that Najib - who was the chairman of the 1MDB board of advisers - would be held liable for his role in the debt settlement.

However, it will be a different story for Mr Irwan - sources did not reveal the number of charges he will face.

It is learnt that he will be held for the night on Wednesday before being brought to the Kuala Lumpur Court Complex the next day.

Apparently, he had been called by investigators "numerous times" to answer questions on the debt settlement between 1MDB and IPIC.

His last session with the MACC was on Aug 10.