The former Inspector-General of Police urged the Pakatan Harapan government to do so given what Dr Zakir has done in his home country as well as in Malaysia.

"Prime Minister Tun Dr Mahathir Mohamad had commented that the government will consider rescinding his PR status if it is proven that he has committed criminal offences.

"With solid evidence of what he said in Kelantan and what he did in India, I urge the government to revoke Zakir's PR status and hand him over to the Indian government and let him face the laws there, " he said on Sunday (Aug 18).

Tan Sri Rahim said he is aware that certain parties might disagree with his view but they must ask themselves why there are many Islamic figures in India who are not facing legal problems except Dr Zakir.

"There must be something that he did in his home country that is against the law as he was put on the wanted list by Indian authorities.

"We don't need foreigners to come here and use religion to incite chaos and trouble.

Mr Rahim said he does not see any political ramifications on the part of the ruling government or opposition parties if the controversial speaker was sent back to India.

"(The government) should tell him to go back to India and face the laws there.

"He must be responsible for his actions and face it, as the Malay says, 'berani buat, berani tanggung" (reap what you sow).

"The country should not be a "pak sanggup" (to blindly accept) in taking him in as we have no shortage of Islamic experts or scholars in the country, " he said. 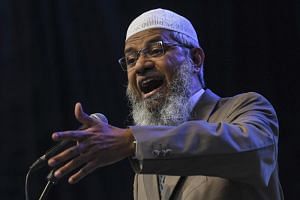 Malaysia to show India-born Muslim preacher the door after attacks on Chinese, Indians

Mr Rahim said as a patriot, he felt deeply hurt that a foreigner, who was granted PR, had the nerve to utter comments that could incite trouble among Malaysians of different religion and race.

"It only shows that he does not respect our way of life. Malaysians live in peace while respecting each other's beliefs and ethnicity, " he said.

Mr Rahim also questioned why Dr Zakir was granted PR status in 2015, given that he was wanted by the Indian government as well as his history of touching on sensitive matters that offended worshipers of other religions.

"How can such a foreigner be granted PR in the blink of an eye. To my knowledge, it'll take years for someone to be given PR status, despite his or her contribution to the economy or social causes."I also wonder whether proper due diligence and thorough background checks were conducted by the authorities before the PR was approved. Zakir is wanted by the Indian authorities in connection with his activities that infringed on the laws there and yet why did our country easily accept him then?

"I find it strange that the then government, approved his arrival in Malaysia and subsequently granted him PR, " he said.