Speaking in Parliament, Datuk Seri Mahdzir said that the country's food programmes were able to reach both urban and rural students, The Star reported.

"Based on our own study, the extent is not to a point where there are students who have no food to eat at all," he added, when answering a question by opposition Parti Keadilan Rakyat Member of Parliament for Lembah Pantai Nurul Izzah Anwar in Parliament on Tuesday (March 13).

Ms Nurul Izzah had asked if the ministry would carry out a study to address the problem of malnourished children among the urban poor.

Titled "Children without: A study of urban child poverty and deprivation in low-cost flats in Kuala Lumpur", the Unicef study also noted that poverty impairs the education opportunities of children living in low-cost flats. This makes them more vulnerable to malnourishment, potentially stunting them physically and damaging their cognitive development, it added.

While the national poverty rate is less than 1 per cent, the Unicef report indicated that 99.7 per cent of children in low-cost flats live in relative poverty and 7 per cent in absolute poverty. 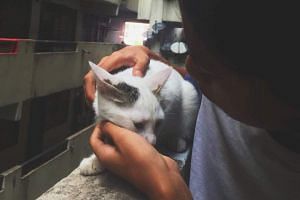 Produced by DM Analytics, the study was carried out in 2017 and surveyed close to 1,000 households with children in PPR houses in Kuala Lumpur and Petaling Jaya.

Mr Mahdzir also took issue with the study for comparing the situation faced by the country's children to those of children in Ghana. According to the report, in terms of stunting, Malaysian children performed worse than Ghana, despite its GDP per capita being six times higher.

"I don't know how the (Unicef) report could be published, comparing us to Ghana. We can see for ourselves, our students, if you compare them to Ghana in terms of food, we give food to all (needy) children," he was quoted saying by the Malaysiakini news website.