Deputy Minister for Communications and Multimedia Jailani Johari said, as quoted by the Malay language Sinar Harian daily, that following the seizure in Bali of luxury yacht Equanimity believed to be owned by businessman Low Taek Jho, the foreign media has been spreading fake news to tarnish Datuk Seri Najib's name ahead of the upcoming general election.

The warning came as the Malaysian government is preparing legislation to strengthen punishments to whom it deem to be spreading "fake news".

"The ministry has identified several news portals that are trying to revive the 1MDB issue following the seizure of the Equanimity. Among those portals are The Wall Street Journal, The New York Times, The Economist, Australian Broadcasting Corporation, and the latest, MSNBC," Datuk Seri was quoted Jailani as saying on Sunday (March 11) by Sinar Harian.

"While the government is trying to combat fake news here, these issues are brought up by sources from outside the country," he added. "We believe that these efforts are by certain quarters who have a political agenda and are trying to damage the prime minister's good name" ahead of the 14th general election.

His ministry is monitoring the matter through the country's Internet regulator, the Malaysian Communications and Multimedia Commission, and advised these news outlets to stop publishing such "fake news".

The 1MDB fund is at the centre of billion-dollar money-laundering probes in at least six countries, including the Unied States, Switzerland and Singapore.

The US Justice Department alleges in civil lawsuits that US$4.5 billion (S$5.93 billion) was stolen from 1MDB - which was set up by Mr Najib - in a campaign of fraud and money-laundering. 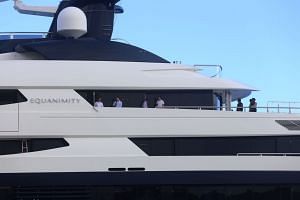 Mr Najib and the fund deny any wrongdoing.

The suits list US$1.7 billion in assets allegedly bought with the stolen funds, which US officials are seeking to recover.

Those assets include the 90m yacht Equanimity which US officials said was purchased by Malaysian financier Mr Low, also known as Jho Low, an unofficial adviser to 1MDB. The boat was seized by Indonesian authorities in Bali two weeks ago at the request of US investigators.

The yacht was handed over to the FBI on Thursday (March 8).

Malaysia's police chief said there is no link between Mr Low and 1MDB.

A spokesman for Mr Low has said the yacht's seizure was part of the DOJ's "pattern of global overreach - all based on entirely unsupported claims of wrongdoing" in the 1MDB case.

The Malaysian goverment is meanwhile preparing legislation proposing that those who spread "fake news" be punishable with fines of up to RM500,000 (S$159,000) and 10 years in jail. This is 10 times the limit for transmitting data deemed "offensive" and a possible "annoyance", a clause which has already been criticised for stifling free speech.