PETALING JAYA (THE STAR/ASIA NEWS NETWORK) - The Malaysian government wants to make it mandatory for consumers to send certain unwanted electrical and electronic items to places licensed to handle e-waste.

The proposed change in the law aims to reduce harm to the environment and public health when such waste is not disposed of properly.

Most of these items are recycled in the informal sector, where those with little expertise and resources rip apart the appliances and devices and burn some components to extract materials that can be resold.

All this is done with little thought for health and environmental effects. In a statement to The Star, the Department of Environment (DoE) said it realised the importance of tackling scheduled e-waste management issues in Malaysia.

"The DoE has drafted a specific law for the six controlled items.

"In the draft regulation, these items generated from households, institutions, commercial and others are listed to be regulated," it said.

Asked if "regulated" means it would be the consumers' responsibility to discard or send these items only to registered retailers, collectors, recycling facilities or recovery facilities, the DoE replied: "Yes." 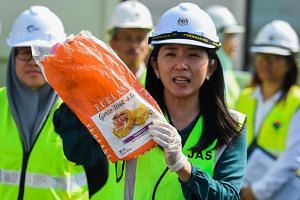 It said these controlled items were currently handled by the informal sector such as house-to-house collectors, community bodies and non-governmental groups.

"The specific legislative provisions to control the management mechanism of the items are important to ensure that they do not pollute the environment or cause any harm to human health," it added.

The draft regulation, said the DoE, was still under review by the Attorney-General's Chambers.

"The scheduled e-waste regulation does not have to be tabled in Parliament," it said.

Environment waste management specialist Theng Lee Chong said the new regulation proposed by the DoE would likely take the form of an Extended Producer Responsibility system, which has been applied in many countries, including the European Union, Taiwan, Hong Kong, Japan, South Korea and China.

Under this system, which is based on the concept of shared responsibilities, manufacturers and importers must pay a recycling fee. They are responsible for the products until the latter's "end of life".

"The recycling fee will be used to pay for the proper collection and recycling of the e-waste in an environmentally sound manner," Dr Theng said, adding that this system emphasises the responsibilities of manufacturers and importers.

"Of course, other stakeholders such as retailers, collectors, recyclers and consumers also have their respective roles," said Dr Theng, who worked with the expert team put together by the Japan International Cooperation Agency to help the DoE formulate the regulation.

At present, the management and control of e-waste is regulated under the Environmental Quality (Scheduled Wastes) Regulations 2005, enforced since Aug 15, 2005.

Under this regulation, e-waste is categorised as a scheduled waste. Any importation or exportation of it is regulated under Section 34B of the Environmental Quality Act 1974 and the Basel Convention on the Transboundary Movements of Hazardous Waste and Disposal 1989.

The DoE said enforcement of the regulation was currently only for the management of e-waste generated from industrial premises.

"There is no legal mechanism for the control and management of e-waste generated by households.

"Also, there is no formal system for managing household e-waste in an environmentally sound management system for recovery and disposal," it said.

According to The Global E-Waste Monitor 2017 Report by the United Nations University, Malaysia generated 8.8kg of e-waste per person in 2016, totalling 280,000 tonnes.

That year, the world produced 44.7 million tonnes of e-waste - or 6.1kg per person - which is equivalent to the weight of 4,500 Eiffel Towers.

Most e-waste contains precious metals (such as gold, silver, platinum and palladium), iron, copper, aluminium and plastics that can be extracted and sold.

The report also estimated that secondary raw materials from e-waste were worth €55 billion (S$84.7 billion).

But much e-waste also contains rare earths, hazardous metals (such as mercury, lead and cadmium) and chemicals like chlorofluorocarbon and flame retardants.

Dumping or illegal recycling of e-waste can cause these materials to leak into the environment.