In a letter congratulating Mr Erdogan on winning a second term in the presidential election held over the weekend, Datuk Seri Anwar said Turkey's progress and its place in the world would be more assured under Erdogan's "dynamic stewardship".

"I am also convinced that your victory is also a victory for the Islamic world in portraying a modern and progressive face of Islam that embraces change while not compromising on the values of our faith and the fundamental teachings of the Holy Prophet," he said.

Mr Anwar, who is de-facto leader of Parti Keadilan Rakyat - a member of Malaysia's ruling alliance Pakatan Harapan - also congratulated the people of Turkey for their peaceful participation in the democratic process.

"I am convinced that your commitment to democracy, the continued betterment of the Turkish people, the promotion of peace and the eradication of subversive elements which were key election promises by the AK party contributed greatly to your victory this second time around," he added.

Under Mr Erdogan, the Turkish government has either taken over or shut down media organisations, while thousands of people have been detained since a coup attempt in 2016.

Mr Erdogan will assume major new powers under Turkey's new constitution, among them the power to directly appoint top public officials and to intervene in the country's judiciary. 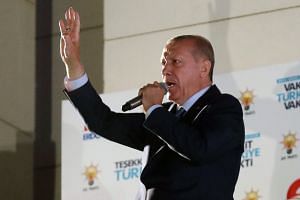 His critics say this would place too much power in the executive, undermining the checks and balances needed for a properly functioning democracy.

Mr Erdogan however argues that he needs this kind of authority to address the country's economic woes and to defeat Kurdish rebels.

Meanwhile, Mr Anwar said Mr Erdogan's declaration of "one nation, one flag, one country, one state" in his victory speech is the true mark of a statesman in bringing together opposing sides after a hard-fought election.

"As you know, we here in Malaysia too are going through an unprecedented chapter in our nation's history following the victory of my coalition party for the first time.

"Closing ranks and uniting different factions is our first task in taking our nation forward.

"As you begin your second term as President, I am looking forward to continuing our working relationship, although this time not as Malaysian's opposition leader but as a participant in Malaysia's new government and leadership," Mr Anwar said.