KUALA LUMPUR - The leader of Malaysia's new ruling coalition Pakatan Harapan (PH) Anwar Ibrahim has proposed that all state governments that it controls take a 10 per cent pay cut, to emulate the salary reductions of the federal PH Cabinet.

"I urge all state governments under the Harapan to consider and implement a similar move," he said in a statement, as quoted by Malaysiakini news site on Friday (May 25).

Malaysia's 14 Cabinet ministers this week announced a 10 per cent pay cut as part of efforts to curb government expenditure.

"The trust bestowed by the people must be welcomed with full consciousness, to practise a mature democracy where the people and media are free to continue monitoring," he said.

PH retained the Penang and Selangor governments in the general election, and won the Johor, Negeri Sembilan, Melaka, Perak and Kedah state assemblies. 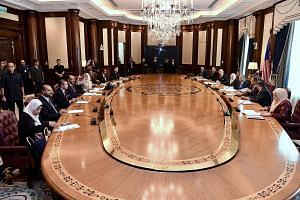 The move comes as the new government grapples with a debt burden of RM1 trillion (S$340 billion), or 65 per cent of the gross domestic product.

Former premier Najib Razak had disputed the figure, saying the country's debt stands at 50.9 per cent of GDP.

Finance Minister Lim Guan Eng on Thursday (May 24) gave the breakdown of the federal debt, saying official debt stands at RM686.8 billion, or 50.8 per cent of GDP.

But added to this are government guarantees for entities unable to service their debts amounting to RM199.1 billion, a sum that includes RM38 billion owed by scandal-hit 1Malaysia Development Berhad (1MDB). This brings the debt level to 65.4 per cent of the economy.

Mr Lim also pointed out that another RM201.4 billion was committed to "lease payments" for projects such as the building of schools, roads, police stations and hospitals.

This takes total government liability to RM1.0873 trillion, or 80.3 per cent of the economy as of the end of last year.

Mr Najib, in a Facebook post on Friday (May 25), insisted that he had been right all along.

He wrote: "The previous government had always complied with international public debt reporting guidelines as defined by the IMF (International Monetary Fund) and World Bank. Therefore, the figure of 50.8 per cent is a universally accepted measurement.

"Contingent obligations, such as guarantees, have never been included in the official measurement of government debt, not even during Tun Mahathir's previous reign.

"The government had given these guarantees to certain entities it owns to help lower their financing cost. These are typically long-term obligations backed with revenue-generating assets".