KUALA LUMPUR (THE STAR/ASIA NEWS NETWORK) - Malaysian businessman Vincent Tan has proposed a fund to be set up to buy the land where the Seafield Sri Maha Mariamman Temple is located.

He said it would be the best way to ensure the temple remains there.

"The public can buy the land, pay off the developer and let the temple stay. It will be difficult to expect the Selangor state government to buy the land," he said.

He was also joined by Tan Sri Barry Goh, who previously headed MCT until it was taken over by Ayala Land from the Philippines. 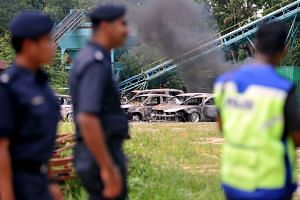 Tan Sri Kong said the contribution was a gesture towards the "country's harmony and peace".

Tan is confident more Malaysians are prepared to donate to keep the temple at the present site.

"Malaysians are by nature respectful of all places of worship," he said.

He said Malaysians believed in the freedom of religion and were tolerant of each other.

Goh, who is a non-independent and non-executive director at MCT, expressed his support for the proposal.

He is also the executive chairman of BGMC, a listed company in the Hong Kong Exchange main board.

Tan, a follower of the Tzu Chi Buddhist charity group, said he upheld the teachings of the group's founder and leader, Master Cheng Yen.

"Master has always advocated inter-religious harmony and tolerance. Tzu Chi has built many churches and mosques in many countries."

"Tzu Chi members are encouraged to be helpful to other religious organisations," he said.

Tan said he would seek support from others for the proposal, saying he would provide more details and the support mechanism.

He said he would also use social media to get crowdfunding for the proposed exercise.

Those who wish to donate to the fund can make a donation by cheque payable to Sun Media Corporation Sdn Bhd with the words Save Seafield Temple written on the back to be sent to Lot 6, Jalan 51/217, 46050 Petaling Jaya, Selangor.

Donations can also be made via eBanking to Sun Media Corporation Sdn Bhd at Maybank account nunber 5081 7770 0420, with the words Save Seafield Temple entered into the additional info/notes section.

On Saturday, Malaysia Hindu Sangam (MHS) also said it will lead any negotiations to purchase the land that the temple sits on should this option become a reality.

Its president, Datuk RS Mohan Shan, in a statement, called on the Federal Government to assist in getting the land valued before its conversion from agriculture to commercial purposes.

MHS is an organisation that the government consults on matters affecting the Hindu community in Malaysia.

On Tuesday morning, a mob attacked the developer’s office.

Two lawyers are among 30 people arrested by police so far.

One City Development has denied the allegation.

Malaysia’s Foreign Ministry has, meanwhile, condemned “irresponsible” allegations from a small right-wing group in India about the recent attacks.

The ministry said the allegations were contained in a memorandum sent by Mr Arjun Sampth, the president of the Hindu’s People’s Party in India - better known as Hindu Makkal Katchi - who falsely claimed that 200 Islamic terrorists had attacked temple devotees who were trying to defend the place of worship.

“The Malaysian Government is taking a serious view of Hindu Makkal Katchi’s irresponsible statement that was made without fact-checking and aims to destroy the good bilateral relations between Malaysia and India,” the ministry said.

The High Commissioner of India to Malaysia had given his assurance that the Indian government fully supported the actions taken by the Malaysian government to address the issue, and that it will not get involved in the internal affairs of the government.